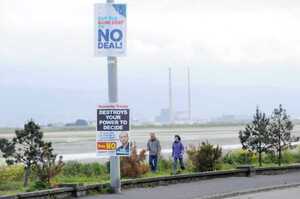 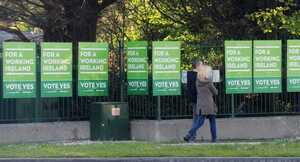 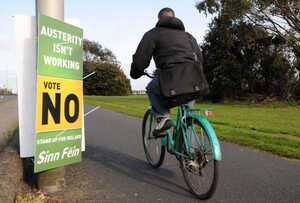 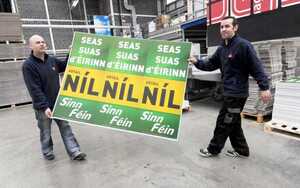 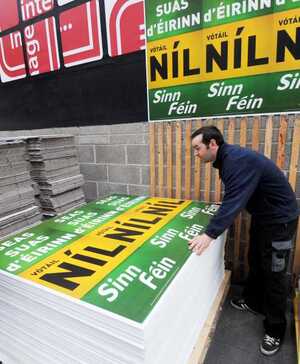 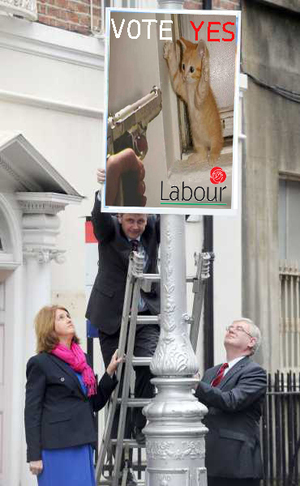 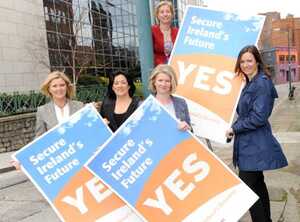 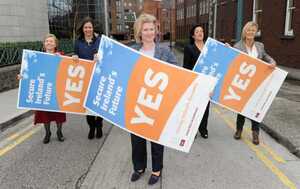 Representing IBEC [Irish Business and Employers Conference] at the launch of its campaign for a Yes vote this morning were, above from left: CEO of Fujitsu Ireland, Regina Moran, Vice President of GlaxoSmithKline Ireland Sally Storey, IBEC President and Managing Director of Gilead Sciences, Julie O’Neill, CEO of CPL Anne Heraty and Managing Director of Tour America, Mary McKenna. 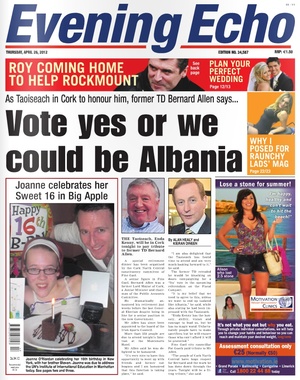 Is this some kind of Hoxha? 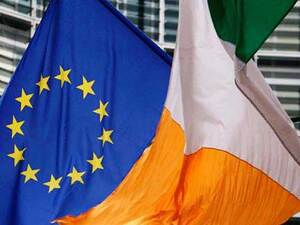 It’s supposed to be boring.

I am pleased to have this opportunity to inform the House that the Irish people will be asked for their authorisation, in a referendum, to ratify the European Stability Treaty.

I strongly believe that is very much in Ireland’s national interest that this treaty be approved, as doing so will build on the steady progress the country has made in the past year.

That progress has seen international and investor confidence in Ireland rising, leading to many new investments in our country – investments that are creating new jobs for our people.

I want that flow of investment to continue and expand.

Ratification of this Treaty will be another important step in the rebuilding of both Ireland’s economy, and our international reputation.

It gives the Irish people the opportunity to reaffirm Ireland’s commitment to membership of the Euro, which remains a fundamental pillar of our economic and jobs strategy.

More binding and enforceable fiscal rules as a result of ratification will be good for both Ireland and the wider eurozone, and will cement growing international confidence in Ireland’s recovery.

Long before any discussions of a new set of fiscal rules for the eurozone, the new Government had committed itself to legislate for equally challenging domestic deficit and debt rules.

In this referendum, the Irish people can confirm our commitment to responsible budgeting and, in doing so, ensure that the reckless economic mismanagement that drove our country to the brink of bankruptcy will not be repeated by any future Government.

The creation of stronger fiscal rules is an essential element of the steps that are needed to ensure stability, confidence and growth here in Ireland, and in the Eurozone.

Throughout the process leading to this new Treaty, the Government has consistently said that the final text would be referred to the Attorney General for her advice as to whether a referendum was required to ratify it in Ireland.

At this morning’s Cabinet meeting, the AG conveyed her advice that, as this treaty is a unique instrument, outside the European Union treaty architecture, on balance, a referendum is required to ratify it.

On foot of this advice, the Government has decided to hold a referendum on this issue in which the people of Ireland will be asked to give their authorisation for the ratification of this treaty.

On Friday, along with other heads of government, I intend to sign this treaty in Brussels.

In the coming weeks, the Government will finalise the arrangements and process leading to this referendum, including the establishment of a referendum commission to ensure adequate public information is provided, a referendum bill which will be debated in the Oireachtas, and draft legislation to provide for the implementation of the treaty’s provisions will be published.

I am very confident that, when the importance and merits of this treaty are communicated to the Irish people, they will endorse it emphatically by voting Yes to continued economic stability and recovery.

I look forward to that debate – one which I believe will produce a result that will be seen in the future as an historic milestone in Ireland’s economic comeback.