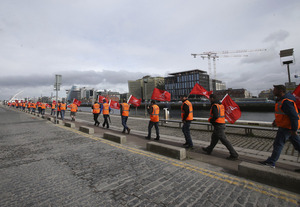 Crane drivers and members of Unite Trade Union march this morning  to the Health Executive Authority to protest against what they claim are unsafe and non qualified crane drivers.

They are also looking for a pay increase from their current wage of €16.69 euro per hour to €24 euro per hour.

The row is further intensified by an inter-union spat with Siptu and Unite over which union represents the crane drivers. The contents of this post about trade union Unite and its former headquarters on Merrion Square has been removed as they were the subject of legal proceeding taken by RTÉ journalist John Kilraine against housing activist Brendan Ogle that have been settled with a full apology: Unite offered temporary use of HQ to homelessness services (RTE) Bringing coals to Newcastle in fairness. THE SECOND-LARGEST trade union in the State has urged its members not to pay the household charge.

Unite yesterday called on its 60,000 members not to register for the charge ahead of the March 31st deadline.

Unite was among several trade union groups which yesterday voiced their opposition to the €100 household charge.

And where do you stand, comrades?