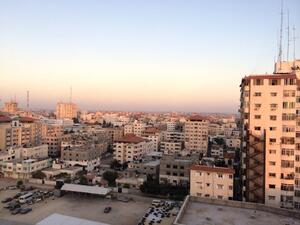 Elaine Bradley is a human rights campaigner working in the West Bank.

Peace is a dirty word here in Palestine. Peace and the “Peace Process” have been used for years as a sleight of hand used to lock the Palestinian leadership into talks that have bamboozled the world into believing that good things were happening, progress being made in the painful, puzzling, protracted conflict with Israel.

Wye River, Camp David, Oslo, Hebron, Taba, Beirut – these geographical names each represent a separate peace process that together span decades. And all the while, the occupation has continued. Life has got harder for Palestinians, with Zion’s steady march towards a greater Israel trampling freedom and justice underfoot, their land and resources expropriated together with their means of livelihood.

It was this relentless march that that collapsed the latest US-brokered talks led by John Kerry who, like King Canute before the waves, tried to halt the tide of illegal settlements. As he found them metaphorically lapping around his ankles, he had to admit defeat.

Even Mahmoud Abbas, who has faithfully served the Oslo Agreement and its priority of Israel’s security to the extent that he has earned the reputation quisling, could not stand for this latest humiliating sham.

On June 2, 2014 the Unity Government was born, with Hamas, Fatah, and the various factions here in Palestine burying the hatchet and agreeing to work to their own agenda. This birth was greeted with cautious approbation by the US, UN, EU, China, Russia and Turkey, and with complete apoplexy by Benjamin Netanyahu and Israel.

10 short days later, 3 Israeli teens went missing and an 18-day worldwide campaign was launched to publicise the tragedy, despite the fact that Israel knew they were dead within the first 24 hours. Netanyahu’s wife deceitfully led the cynical “Bring Back Our Boys” effort.

In the midst of the global media circus that followed, the finger of blame was firmly pointed at Hamas as the guilty party. Hamas, the bogeymen of the west, were the ones who had ruthlessly taken “our boys”.

This narrative was advanced by Israel, and not just entertained by Western politicians and media, but wined and dined and bedded -despite a firm denial from Hamas themselves.

The effect of this tragic spectacle was twofold –it created a distraction from the rampage Israel embarked on in the West Bank, and it helped to manufacture consent for attacks on Hamas in their Gaza base.

While the world’s eyes were turned to a settler mother going to the UN to pitifully plea for intervention to save the life of her already-dead son, Israel unleashed a maelstrom in the West Bank. They killed 9 Palestinians including 2 children and 1 woman; injured a further 77 people, amongst them 13 children and 5 journalists; arrested 592 – targeting Hamas members and political activists, but also 39 children; demolished 11Palestinian homes against the backdrop of an accelerated programme of settlement building.

The discovery of the bodies of the 3 Israelis on June 30 precipitated violent attacks on the Palestinian communities of the West Bank and East Jerusalem: random attacks on Palestinians in public places, gangs of Israelis chanting death to Arabs and beating people up.

There was a spate of hit and run incidents in which settlers injured Palestinians including a child left unconscious in a ditch. There were also a number of attempted kidnappings. Mohammed Abu Khdeir was abducted on his way to morning prayers, beaten and burned alive.

Civil unrest broke out amongst the Palestinian community. Rockets were fired from Gaza in response to Israel’s undeniable provocation and Israel dropped bombs. But it was not until after Israel commenced bombing Gaza that Hamas ended it’s ceasefire, which it has held since November 2012, unlike Israel.

Most of the above, told from the Palestinian perspective, went unacknowledged in the Western media who were too busy giving us mawkish coverage of the latest detail in the lives of the 3 kidnap victims and then, after Israel’s bombing of Gaza commenced, reciting their credo of “Israel’s right to defend itself.”

And now here we are.

In the 51 days since Israel embarked on Operation Protective Edge, the latest chapter in its genocidal campaign against Gaza, the score card stands at 2,168 Gazans killed of whom 519 are children; 10,895 people injured – two thirds of them seriously; 3,306 children injured over 1,000 will be left with a permanent disability; almost half of Gaza laid to waste; no sewage treatment; no clean water; no electricity or means to generate it; little food; and around 350,000 displaced or homeless.

The ceasefire of Tuesday evening comes a great relief. Now comes the business of a negotiated settlement leading to a negotiated peace. And therein lies the problem.

Israel is where it like to be – back at the table, back in negotiations which, without drastic intervention will likely be another process in which the pertinent issues are never addressed – the fundamental rights of Palestinians ignored, not just by Israel but by the sponsors of these negotiations and by the international community who reiterate Israel’s media friendly talking points but which evade the core issues.

Human rights and rights under international law are inalienable. This means they cannot be taken away from or given up, and yet this is what Palestinians are consistently asked to do in peace negotiations.

For example, successive Israeli negotiation teams have asked for the Right of Return to be given up in exchange for some concession or other. The State of Israel was created through the ethnic cleansing of 700,000 Palestinians from their land. Those who are still alive and their descendants, estimated to number about 4.5 million languish in refugee camps in the region or as internally displaced people in Palestine – 80% of the population of Gaza are refugees. Palestinian refugees have the right to return to their homeland under international law. A right denied to them for 66 years now.

So if armed struggle against occupation is a right, why is the international community supporting Israel’s insistence that the Palestinian resistance in Gaza disarm? Why are they not insisting instead that the occupation ends as, to quote the legendary Dr Mads Gilbert, “If no occupation, no rockets.”

Peace is not merely the absence of hostility; it is an enduring state – the precondition of which is justice. Peace cannot be secured through criminality and oppression. Without justice for Palestinians there can be no peace.

Very few people are aware of the demands of the resistance in Gaza, demands that Israel would not concede to. What was sought were a combination of fundamental human rights- the ending of the illegal blockade that keeps the majority of Gazans impoverished and many near starved; and rights under previous agreements never fulfilled- the building of a seaport, rebuilding of the airport and release of prisoners.

If we, as part of the international community, are serious about peace then we have to stop allowing ourselves to be played for fools by Israel. Our leaders must stop parroting the line about “Israel’s right to defend itself” since, as the occupying power, Israel has no such right. But rather has a responsibility for the protection, health and well-being of the occupied people.

If we truly want peace, then we have to ensure that justice is served.

The demands of the Palestinians in Gaza must be met as a matter of urgency. Israel must be made to account for its war crimes in Gaza and face charges in the International Criminal Court (although Palestine has been put under pressure to trade away that right too). Israel must end the occupation, stop building settlements immediately and give back Palestinian land to its rightful owners. The right to return must be addressed. If this means that there can be no “Democratic Jewish State” as with a majority of Palestinian citizens it cannot be democratic and Jewish in character, then so be it.

We are all lessened by the terrible suffering inflicted on the Palestinian people. Without justice there can be no peace.

We Walked In Solidarity

Bring A Bear Show You Care