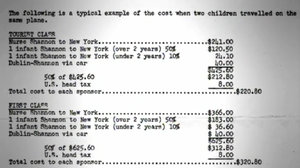 Tonight on BBC2, Martin Sixsmith (author of Philomena) goes on a journey to investigate the Irish Catholic Church’s role in an adoption trade which saw thousands of ‘illegitimate’ children taken from their mothers and sent abroad, often with donations to the Church flowing in the other direction.

In Ireland and in America, Martin hears the moving stories of the parents and children whose lives were changed forever and discovers evidence that prospective parents were not properly vetted – sometimes with tragic consequences.

He also witnesses the struggle of mother and child in their attempts to find each other across continents before it is too late. With no one willing to help and information scarce, for some it feels like after all these years the Catholic Church is still trying to keep them apart.

10 thoughts on “Staying In Tonight?”