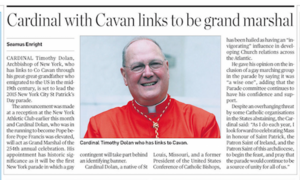 From this week’s The Anglo-Celt

Cardinal Timothy Dolan will be the grand marshal at the 2015 New York St Patrick’s Day Parade.

You’ll recall Cardinal Timothy Dolan, the archbishop of New York, was the man sent to Ireland in March 2010 by Pope Benedict to lead the Apostolic Visitation to Ireland and examine the country’s four archdioceses in the wake of the sex abuse scandals.

In May of 2012 the New York Times reported Dolan authorised payments of as much as $20,000 to sexually abusive priests – when he was the archbishop of Milwaukee – as an incentive for them to agree to be dismissed from the priesthood.

The documentary Mea Maxima Culpa: Silence In The House of Good documented the crimes of one of those men, Fr Lawrence Murphy, who abused hundreds of deaf children.

You may also recall how the Survivors Network Of Those Abused By Priests reported on October 23, 2013 how:

“[US District Court] Judge Rudolph Randa [yesterday] ruled that a deaf survivor of  Fr. Lawrence Murphy is bound by an agreement he reached with church officials even though he was deceived in order to secure that agreement. The agreement was reached in an archdiocesan program designed by [Cardinal Timothy] Dolan in 2003. We believe the purpose of that program was to quickly and quietly settle with victims while deliberately misleading them about the archdiocese’s prior knowledge of the criminal history of abusers. At the same time, it induced victims to accept nominal restitution in exchange for waving all future legal rights. If the victim would later discover they had been deceived by Dolan and the archdiocese, as we now know they were, they would have no legal recourse.”

Related: “Seán Brady Had Evil People Reporting To Him”

At 34th And Fifth Avenue 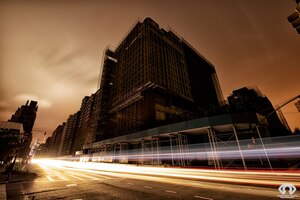