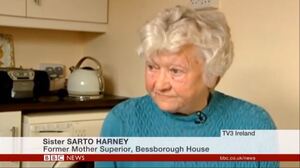 Cathy Deasy, who was adopted, had been trying to trace her mother for years and wrote many times to Sister Sarto. Sister Sarto suggested that her mother was dead.

But Cathy discovered her mother was alive and had spent 35 years in an institution after giving birth to her in a mother and baby home.

She confronted Sister Sarto in 2002 and captured the moment on video.

From 1996, in an RTÉ Prime Time documentary Sister Sarto said:

Earlier this year on TV3, Sister Sarto said in relation to Bessborough Mother and Baby Home that no babies were adopted or vaccinated without the mothers’ permission:

“I think it’s sad that it’s come to this. We gave our lives to looking after the girls and we’re certainly not appreciated for doing it.”

Ireland’s Lost Babies is on RTÉ One tonight at 10:15pm.

14 thoughts on “Mother Superior And Child”