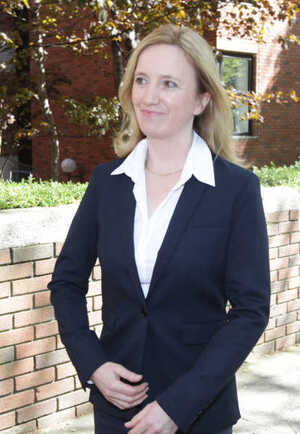 Gemma O’Doherty after her Employment Appeals Tribunal hearing last May

You may recall Gemma O’Doherty’s unfair dismissal case against Independent News and Media in May.

Ms O’Doherty, who worked with INM for 18 years until last August, claims she was unfairly dismissed by INM after revealing that former Garda Commissioner Martin Callinan had penalty points quashed while apparently driving his own car to a security meeting.

At the Employment Appeals Tribunal, Brian Kennedy, SC, for INM, argued that the tribunal be postponed until a defamation case taken by Ms O’ Doherty against her former editor Stephen Rae was concluded, a process that could take years.

But yesterday the EAT ruled not to adjourn and will hear Ms O’Doherty’s case.

Meanwhile, a legal review into the murder of Fr Niall Molloy, prompted by Ms O’Doherty’s reporting for the Irish Independent, has been “pending” since the end of Summer.