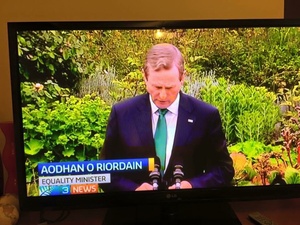 Australia’s inability to achieve marriage equality is now an international embarrassment. While Ireland is gripped by euphoria after a resounding win for the “yes” campaign in Friday’s referendum on same-sex marriage, Australia must reflect on the failures of its political system and its leaders.

The referendum delivered a landslide 62 to 38 per cent majority for change, and is being hailed as a nationally unifying transformative moment for Ireland. It should not be forgotten that homosexuality was illegal in Ireland until 1993, divorce until 1996, and abortion is still banned, except where the mother’s life is in danger.

Opinion polls suggest public support for marriage equality is even higher in Australia than in Ireland, at more than 70 per cent, according to a Crosby Textor poll. Yet we remain incapable of a reform achieved by about 20 other democracies, including now the strongly Catholic nation of Ireland, a country deeply grafted into the DNA of Australia.

Previously: How Low Can Australia Go?

7 thoughts on “Meanwhile, Down Under”