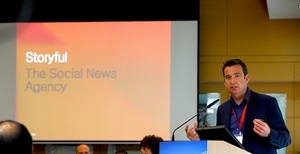 “…So why would anyone of right mind step away from this kind of turbo-charged business? It’s hard to explain to those who haven’t lived the startup life. There comes a time when your continuing benefit to your company is outweighed by the personal cost of not moving on to the next challenge.

Perhaps the parents out there will understand a secondary reality. I’ve reached that sad but glad understanding that my precious little baby is all growed up and doesn’t need me anymore.

I’m leaving Storyful with no absolute certainty about what I’m doing next. But that’s a pretty wonderful feeling. Back in 2010, there was only one opportunity that excited me. Today, in a golden age of storytelling, the options are endless. I’m more passionate than ever about social journalism, media innovation and the challenges and opportunities that emerge from a revolutionary age.

I’m exhilarated by what might come next. But as I look back, I am also profoundly grateful today to all the idealists who made Storyful a reality.”

Mark Little, announcing his resignation from Storyful, the news gathering agency he founded and sold to News Corp for an amount described as ‘large’.

Mark Little on leaving Storyful, stronger than ever (Storyful)

He Owns The News

Anything Good On Storyful?

Wells Did You Ever?