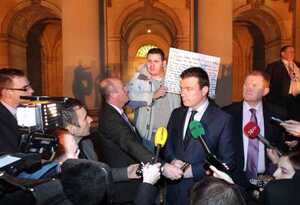 Minister for the Environment Alan Kelly, responding to questions at a forum on homelessness  last December, following the death of Jonathan Corrie. The man holding the sign behind Mr Kelly is David Finn, whose father Noel Finn died after living homeless for seven-and-a-half years in Clondalkin

Cathal MacCoille: “Dublin City Council says the Government has left it €18million short in tackling homelessness with Assistant Chief Executive Richard Brady told councillors last night that the deficit is serious and could affect services. The councillors looked for funding of over €55million last April but were informed by the Department of the Environment that it will just get €37million for this year. Paul McAuliffe is a Fianna Fail councillor on Dublin City Council and he’s with us now. Good morning Paul, you’re welcome to the studio this morning.”

MacCoille: “Was this a surprise, you only found out last night?”

McAuliffe: “Yeah, I suppose the figures were circulated to the Corporate Policy Group which is a cross-party group which is tasked with running the councillors and running the budget and really, not only the decision, but the scale, the €18.5million really did take back many councillors. It was in marked contrast to the commitment that the Minister [for the Environment, Alan Kelly] gave last December, following the death of Jonathan Corrie, when he said that finances would not be an issue in terms of taking people off the streets. And when we have over 1,000 children in emergency accommodation, to put that very last front of emergency accommodation, to put that at risk, by withdrawing funding and not making funding available, really, it has to be questioned why the minister hasn’t stepped in and discussed this with his officials.”

MacCoille: “Is the problem bigger than you expected?”

McAuliffe: “Absolutely, we set aside, the service would cost €68million in total. We set aside a budget of €55million and we set a contingency of five as well but the department have only come back with €37million, it’s a huge shortfall, it’s just 60% of the total cost, rather than the 90% which is required.”

MacCoille: “The Department say that the €55million, that Dublin City Council knew that the allocation, the national allocation was €55million, an increase they say of €10million or 22% on last year and that if your request had been acceded to, no other city, town or county would have received any allocation. This was not a tenable option.”

McAuliffe: “Well perhaps they should have told their own minister because he did not make that clear last December. We were told to go ahead and ensure that people were not left on the streets, that people were put into emergency accommodation, that we were to turn around the voids in the city and on all of those issues, on all of those budgets, the minister has fallen short.”

MacCoille: “If the problem is bigger than expected by you, or indeed by Government, then obviously, the money that was originally allocated nationwide wasn’t going to be enough, is that fair?”

McAuliffe: “Absolutely, and I think that’s a matter for the minister to respond to. It has been clear all of last year and every month of this year that the homeless crisis is increasing.”

MacCoille: “So there’s no guarantee that even if you get the €55million you requested that even that would be enough?”

McAuliffe: “Yeah, we have, we had more than 30 people a month presenting as homeless last December. We now have more than 60 people in May and June representing each month.”

Previously: Less Than 50m From The Dáil

‘The True Facts Of The Situation Are Not Being Established’

21 thoughts on “’60 People A Month Are Becoming Homeless’”