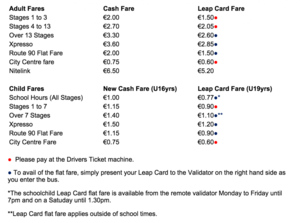 “Minister for Transport Paschal Donohoe said that level of the increases was “significantly less” than previous increases.”

““As Irish Rail, Bus Éireann and Dublin Bus begin to get back on their feet again, because of more people using their services and because of additional investment from the Government, I am expecting that those sort of price increases that we saw in previous years are not repeated,” Mr Donohoe said.”

Many cash fares to rise for commuters (RTÉ)

Previously: Pulling Out All The Stops

42 thoughts on “Extract Change Only”