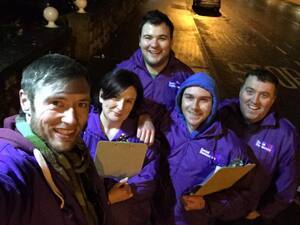 On the campaign trail we find apathy and indifference.

But enough about the politicians.

There’s always plenty of talk come election time of voter apathy and the disconnect between citizens and the political system.

As someone whose entrance to politics came via a passion to engage people of lower socio-economic backgrounds in the political sphere, I am one of those guilty of constantly talking about the apathy that exists.

No doubt, on the canvass trail over recent months I have heard more than my fair share of ‘sure what’s the point? they’re all the same.’ or ‘I know nothing about politics, they’re all just in it for themselves’.

People worry about young people’s engagement with politics; those on the margins of society; and those people who just never seem to turnout come polling day.

We decry the lack of engagement, we blame apathy for maintaining the status quo and whether you’ll admit it or not, we judge people who don’t go out and vote. How often have you heard the ‘people died for that right’ refrain? I’m guilty of it myself and I do stand by it however this canvass trail has opened by eyes that bit wider as to the reasons for abstention.

While so much of the negative attention is focused on decrying the voter apathy, there is a lack of similar attention given to politicians’ apathy regarding certain sections of society and how that political abandonment of certain areas and demographics might actually be the reason for those people not coming out to vote.

Last Friday night I hit the icy pavements (quite literally hit it at one stage!) and headed off to an estate in Clondalkin that is described in the Maynooth university AIRO research project as being ‘Very Disadvantaged to Extremely Disadvantaged.’

I had headed there because my Canvass Director had identified that of those registered to vote in the area, a high proportion of them actually turn out to vote.

What I found there was joyous. I’m not exaggerating. As someone from a working class background who is passionate about the importance of politics to change our lives, I was giddy from the exchanges I had that night.

I was met with passion, engagement and a sense of relief from people that someone felt it worthwhile to come and speak with them. On too many doors I was told that I was the only politician to have ever knocked on their door. One man said to me, I’ll vote for you purely because you weren’t afraid to come in here. That’s depressing in itself but revealing nonetheless.

The young people I encountered sitting on freezing cold walls around the place that evening were no more interested in politics. But would they be if they got a chance to have a face to face interaction with an actual real person who wanted to listen to them, hear what they had to say and acknowledge both their hopes and their fears?

Certainly that was how I felt with those I managed to speak to. A face and name on a poster is one thing, a real person at your door, engaging with you as a peer is an entirely different thing and I challenge anyone to have that type of interaction and not feel engaged in the political process.

For a political system to be truly representative it must have the voices of all those it seeks to represent at its heart. I would contend that it currently fails in that regard.

I know, from years of political strategy lectures and experience that the process of pulling apart an electoral register is a cynical exercise designed to identify the likely voters and those to be ignored.

That is electioneering rather than politics but it is still not acceptable. I freely admit that I will be focusing my attention, with very limited resources and time, on those areas where we know people actually come out to vote.

Those are the people who deserve our biggest efforts not our apathy.

Anne-Marie McNally is a political and media strategist working with Catherine Murphy TD and is a candidate for the Social Democrats in the forthcoming General Election. Follow Anne-Marie on Twitter: @amomcnally

48 thoughts on “To Reach The Parts Others Won’t Touch”