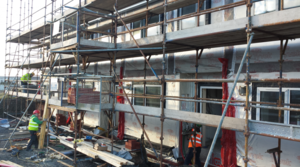 The new modular housing development for homeless families being built near IKEA in Ballymun, Dublin.

One builder I spoke to commented it would be at least another month before all 22 temporary homes, (costing €4.2m), are completed.

If this is true, it’s a long way from the December 21, 2015 “ready for occupation” date cited in a press release by Dublin City Council – notwithstanding a local row that halted development there for a few days.

It would also be interesting to know how will the Dublin Region Homeless Executive select which families live there, given there are many hundreds of homeless families now in the capital?

Saving The Pets Of Ballymun

35 thoughts on “Meanwhile, In Ballymun”