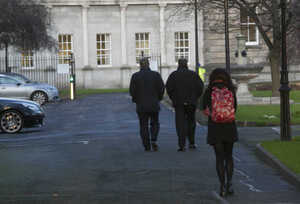 From top: Enda Kenny at government buildings this morning to convene his last cabinet meeting of this government term; Michael Taft

What many won’t say:

The road ahead is bumpier than you think.

So the economy is back in recovery mode but under the Government projections we are not going to bounce back to pre-recession levels of living standards.

Lower your expectations, sisters and brothers, the recovery is setting in. Let’s take a historical look at two indicators of living standards.

Between 1995 and 2000 (the good phase of the Celtic Tiger, based on investment, manufacturing and exports), real consumer spending averaged 8.5 percent annually per capita. That was a strong performance, with employment rising, increasing wages and the ongoing shift to a modern enterprise base.

Between 2000 and 2007 (the bad speculative phase) real consumer spending averaged 3.4 percent per capita. A little better than the pre-Celtic Tiger period but as we know, unsustainable.

Then the recession hit and consumer spending fell by over 10 percent. However, as always happens, the economy recovered. In the textbook alphabet, there would be a burst coming out of the recession, representing pent-up demand, and then things would settle back down to past trends.

If the Government projections come true, this will not be the case. 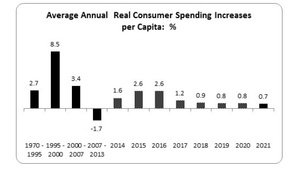 We are in the middle of a bump which should continue into this year. However, the Government estimates that it will fall off rapidly in 2017 and remain below 1 percent into the next decade.

But this might not be so bad if the Government increased its spending on public services, or government consumption. If, for instance, the Government introduced affordable childcare, reducing fees by half, then the savings to the households could be redirected to other areas of consumption; similarly with free health care.

Between 1970 and 1995, real government spending on public services averaged 2.8 percent annually per capita.

Between 1995 and 2000, real government spending on public services averaged 5.0 annually per capita.

Recession time and public service spending fell by 16 percent up to 2013.

So what is the government projecting going forward? 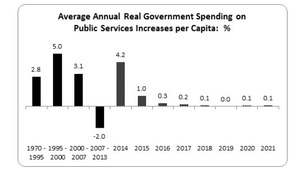 In 2014, government consumption rose by 4.2 percent but this was largely a statistical fluke, factoring in productivity gains from the Lansdowne Agreement. In subsequent years there is effectively no increase at all.

Therefore, there are three principles that should guide the next government.

First, investment; driving investment increases productivity and enterprise expansion which, in turn, increases wages and employment. This is a more sustainable approach to consumption. Pumping consumer spending through tax cuts in the hope that this will increase investment (through business confidence, etc.) is misplaced – as Michael Burke shows here. Pumping consumption in a small open economy like Ireland’s is even more problematic; without stronger export growth, this can lead to reduced growth due to imports.

Second, prioritise public services over tax cuts. If the state provides free healthcare, this reduces costs for many households which can redirect the saving into other areas. It also makes this service more accessible to people who otherwise couldn’t afford costs in the private market. This makes for a more equitable approach to consumption.

Third, redistribute: if you take €100 million from higher income groups and redirect it to low income groups, consumer spending will rise as the latter spends almost everything they get. Therefore, prioritise income supports for those out of work and the low-paid.

There is rising uncertainty in European and international markets. If anything can see us through this, it is a programme that focuses on our economic infrastructure, provides services collectively (reduced cost, greater participation) and promotes income equality. This is a long-term approach.

Right-wingers, Fine Gael in particular, are proposing to reduce our tax base while starving economic and social investment.

If this short-termist, electorally-populist formulation isn’t a recipe for instability it is hard to know what is. And as a set of policies designed to enhance living standards, it is a bust. Progressives should put forward a different, more economically responsible programme.

Investment, public services and equality: how’s that for a campaign theme?

59 thoughts on “Lower Your Expectations”