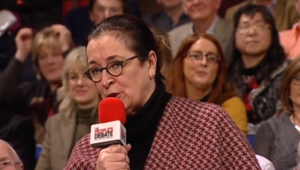 Towards the end of the show, Mayo-born Senator Marie Louise O’Donnell stood up from her seat in the audience and said…

“I have…I have the privilege of going around this country talking to groups and organisations and people and when I go around Mayo and I look at the magnificent Wild Atlantic Way, I can tell you this: I do not want to go into a ship that’s going into a storm. I want to be with a steady, recoverable government, that continues what it began. And you should be with it too.”

You may recall Ms O’Donnell’s glowing report of Enda Kenny to Pat Kenny on RTÉ, following the general election in February 2011.

Previously: The Next Time You Blame Americans For Stereotyping The Irish