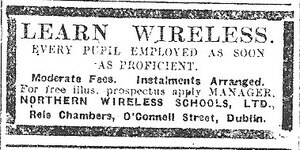 In 1916 Number 10/11 O’Connell Street was the location of Reis’s Chambers, which housed, among other businesses, the Irish School of Wireless. During Easter Week the insurgents captured the building and began broadcasting news of the Rising to the world.

The insurgents’ plans to capture the wireless school was one of the most daring and far sighted acts in revolutionary warfare and became a starting point for all modern revolutions. Capture the local broadcasting facilities.

Was It For Brick?