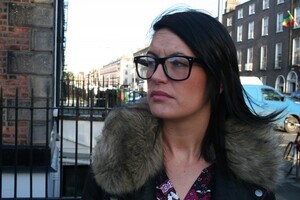 You may recall how Erica Fleming featured in an RTÉ documentary, My Homeless Family, earlier this year.

The documentary showed how Erica, 30, has been living in a Dublin hotel room with her nine-year-old daughter Emily since last summer. Erica works 29 hours a week at a business which has employed her for five years.

You may also recall how Erica’s questions during a post-Budget RTÉ phone-in last October caused a bit of a headache for Minister for Public Expenditure and Reform Brendan Howlin and Finance Minister Michael Noonan.

One hundred years ago, brave Irish men and women took to the streets of Dublin to fight for an Ireland that was more equal than the one they had known previously. They fought for a Republic that guaranteed equal rights and equal opportunities. Most notable for me as a mother, they fought for an Ireland where all of the children of the nation would be cherished equally.

They were incredibly brave but their vision for how our Republic should be, has not been realised. In our Ireland today, 130,000 children live in consistent child poverty. To our great shame, there are 1,600 children in our city who are homeless and spending large parts of their childhood living in single room hotel accommodation.

My beautiful daughter Emily is one of those children. As a mother I want to fight for her. I want to take to the streets and stare power in the eye and hold it to account for the experiences of poverty that are facing my child daily. Her playground is a hotel corridor: I rarely get to provide her with a home cooked meal. As I tuck her in at night, I can’t even afford her the dignity of leaving the room. This isn’t the Republic that people died for and I feel duty bound to demand that my daughter be cherished equally in the eyes of this State.

I feel that the best way that I, and others like me. can pay tribute to the heroes of 1916, is to also take to the streets of Dublin over the Easter weekend.

So here’s what I’m proposing. On Easter Sunday, I invite all of the homeless people of this country to stand with me and other campaigners on O’Connell Street and remind those politicians who will be celebrating the centenary of the Rising, that our children are important too.

Stand with me and, through our presence on the day, let it be known that the best way to pay tribute to those who sacrificed themselves for this Republic, would be to prioritise solving the homeless crisis that is plaguing the lives of so many people in this country.

This will be a friendly, family-orientated event and all we will be doing on the day is standing in solidarity with homeless families. There will be no speeches, there will be no rallies or microphones and there will be absolutely no hate permitted from anybody standing with us – regardless of where it’s directed.

Our intention on the day is to highlight that our children matter and that a home is the minimum we should be affording our children on this anniversary of an event associated with such strong themes of equality and what it truly means to live in a Republic.

Please share this message! Let this event be known to your friends and families and let’s try make this event one that those who sacrificed their lives a century ago would be proud of. This is my duty as a mother. This is our duty as citizens of this Republic.

Previously: “It’s Not Really A Response, Is It? It’s Just A Speech”

32 thoughts on “Standing With Erica”