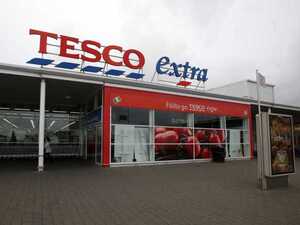 Workers at Tesco Ireland  have voted overwhelmingly for industrial action to resist the proposed wage cuts that management is demanding. The issue is now going to the Workplace Relation Commission. This post is not about the details of the Tesco dispute (you can read about it here).

However, it is timely to take a step back and look at wages that not only Tesco but all retail workers earn.

And when you sneak that peak you will find that retail workers in Ireland are some of the poorest paid in the EU-15. 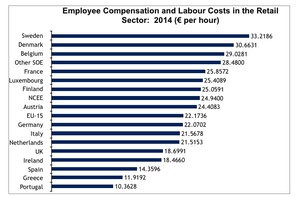 According to Eurostat (the baseline figures are from 2012, brought up to 2014 with the Labour Cost Index), Irish retail workers rank 12th in the EU-15. And these wages are well behind European averages.

Irish retail workers would need a 20 percent increase to reach the EU-15 average.

But when we compare Ireland with our peer group, the comparison deteriorates dramatically.

One peer group are Northern and Central European economies (NCEE). This is the EU-15 figure excluding the poorer Mediterranean countries (though it’s worth noting that Italian retail workers earn more than Irish). In this comparison:

Irish retail workers would need a 35 percent increase in the hourly average wage.

A second peer group is other Small Open Economies (other SOE). This is a comparison used by the IMF and it refers to economies with small domestic markets and a high reliance on exports, just like Ireland.

This category includes Austria, Belgium, Denmark, Finland and Sweden. In this comparison:

Irish retail workers would need a 54 percent increase in the hourly average wage.

Some may object to this, claiming that if a company is not profitable, it cannot increase wages.

This is true enough. But we are confronted with a problem: the last year we have comparative enterprise data in the retail sector is 2012 – a bottom point in the retail business cycle with the economy still mired in a domestic demand sector.

Although profits per employed was about 15 percent below the EU-15, profits in the foreign-owned sector (such as Tesco) was the highest in the EU-15. So even with the consumer economy at rock bottom, a substantial part of the retail sector was doing OK.

Of course, this information should be open and transparent – not only for the workers but for society as a whole. Currently, a high number of firms, especially in the retail sector, are not legally required to make public their full financial accounts.

These firms can be branch affiliates of foreign-owned firms (e.g. Tesco, Aldi, Lidl, etc.), private unlimited firms (Dunnes Store is a major example) and a range of firms whose turnover is below a threshold (yet they can employ a significant number of people). The new government should examine these inequitable and secretive provisions.

Nonetheless, recent trends are looking decidedly better. In the last year, Irish retail turnover increased by nearly three percent; in the EU-15 the growth rate was half that. And with a gross operating rate (profits as a percentage of profits) at the EU-15 average, the Irish retail sector is moving back to, if not already exceeding, European averages.

What can be done to drive up employees’ wages?

From the Government end, it could strengthen workers’ rights – the right to collective bargaining, the right of part-time workers to extra hours when they become available (this is already an EU Directive, just not one that operates here), legislate for Sunday premium and overtime, etc. All these would help promote wages.

From the workers perspective, the best thing is to join a union. Mandate – the retail union – recently published a survey which showed that workers in trade unions fare much better than workers outside unions. From the survey:

Retail workers in unionised employments earn an average of €13.03 per hour compared to €10.04 for non-union workers.

100 percent of unionised retail workers have pay scales with service increments, compared to only 14 percent in the non-union retail sector.

The average minimum hour contract for retail workers in unionised employments is 24, compared to 16 hours in non-union employments; a difference of approximately €100 per week.

Those are pretty powerful reasons to join a union.

Ultimately, the struggle over workers’ living standards is a combination of political action and workplace organisation. The retail sector is no different.

And there is a great need for that combined effort. Micheal Collins from the Nevin Economic Research Institute found that 42 percent of workers in the Wholesale and Retail sector were paid below the Living Wage level.

That is economically inefficient, socially obscene and ultimately resolvable at a political and industrial level.

Victory to the retail workers – to the Tesco workers, to all workers who serve us every day: economic and social prosperity depends on it.

37 thoughts on “Every Little Helps”