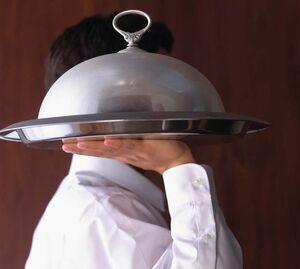 How can we generate economic wealth and create well-paying jobs if indigenous business is over-concentrated in the low paid hospitality and retail sectors?

Here is one part of a presentation I made to the Nevin Economic Research Institute’s Labour Market Conference held earlier this month in the University of Limerick.

This may seem a bit abstract; it certainly doesn’t seem as urgent as other issues such as health or housing. However, this has far-reaching implications for long-term economic growth, household prosperity, and business competitiveness.

There is a narrative about Irish indigenous enterprise (which I shall simply refer to as Irish business) which has been championed by many, notably Dr. Conor McCabe, that Irish business and capital has historically focused on the finance and property sectors, content to service foreign-owned capital but which has, with some exceptions, avoided the high-value added sectors upon which we could build a strong Irish export base. 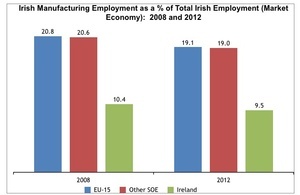 The chart (above) compares Ireland with the EU-15 and our peer group – other small open economies which, like us, have small domestic markets and are reliant on exports.

Irish business is a poor performer when it comes to manufacturing. Whereas one-in-five European workers in the indigenous sector are employed in manufacturing, it is only 10 percent here.

Unfortunately, the EU data is, so far, limited to the period between 2008 and 2012 so we are looking at many countries at the bottom of the business cycle, especially Ireland. Still, Irish manufacturing is weak.

Why should this matter – if we can excel in other sectors? Professor Ha-Joon Chang puts it this way:

‘. . . the manufacturing sector is still – and will always be – the main source of productivity growth and economic prosperity. It is a sector that is most open to the use of machines and chemical processes, which raises productivity. It is also where most research and development, which generates new technologies, is done.

Manufacturing’s contribution to the Irish economy is, per employee, considerable.

Manufacturing has an 83 percent higher impact in the economy per employee.
Unfortunately, the total size of the Irish manufacturing is small which limits this benefit.

However, there are other sectors where Ireland performs strongly – and these, unfortunately, are sectors which are low-wage and low value-added. 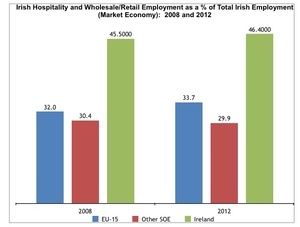 Irish levels far exceed the proportion in other European countries. Indeed, over 17 percent – or more than one-in-six – in Ireland are employed in hotels and restaurants.

While it is understandable that this sector would be higher than our peer group (such as Finland) given greater tourist numbers, there is an over-concentration in Ireland.

For instance, Spain, Greece and Italy all have higher levels of tourism as measured by nightly accommodation occupancy per capita, than Ireland (between 11 and 21 percent higher), they have between 9 and 12 percent of their total market employment in working in the hospitality sector.

Compare that to Ireland’s 17 percent.

This concentration in employment is mirrored in business investment. In the EU-15, investment in the combined hospitality and wholesale/retail sectors makes up 15 percent of total indigenous investment; in other SOE countries it makes 12 percent. In Ireland it makes up 20 percent (in 2008, it made up 25 percent).

Here’s a little factoid to chew on: in 2008, there was more Irish investment in the hospitality sector than in the manufacturing sector.

How can we generate economic wealth (e.g. value-added) if indigenous business is over-concentrated in the hospitality and retail sectors? How are we going to generate well-paying jobs, given these sectors are low-paid? How are we going to build a strong Irish export platform as distinct from the modern, foreign-sector?

It also raises questions regarding the Living Wage.

We hear a lot about Irish business – which is sometimes conflated with foreign-owned firms.

We read stories about Irish entrepreneurs.

What we don’t get is a fact-based analysis of the state of Irish business –that it is concentrated in low-paid, low-value added and – in the case of wholesale/retail – non-traded, or non-export, sectors.

Hopefully, the incoming Minister is aware of this flaw. Hopefully.

87 thoughts on “What is Wrong with Irish Business?”