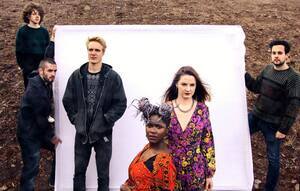 02. Debuting as Moustache Latte in 2013, the band had a brief run under the name before regrouping the follow year under their current moniker, in time to launch their Implicit Content EP. Festival appearances have followed, including Electric Picnic and Knockanstockan.

03. Singer Senita is also busy with other projects, including Lakerama and appearances with Daithi and Le Galaxie. You may also recognise the drummer.

04. Streaming above is I’ve Had a Nice Time, Thanks, filmed live in the intimate surrounds of Cork’s Mother Jones’ Flea Market.

05. Appearing next at Quarter Park Party, an all-dayer (and sister fest to Quarter Block Party) put on by the all-round wonderful folk at Quarter and Southern Hospitality Board in Fitzgerald’s Park in Cork on July 23rd.