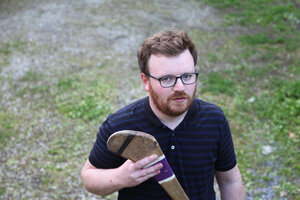 01. So Cow is the nom-de-plume of Galwegian Brian Kelly, who rattles out a pretty nifty line of indie-inflected garage-rock.

02. Coming to life in 2005 as Kelly’s recording project while over in Seoul, South Korea (where in 2009, he briefly gained mainstream attention for naming a song after a local actress/model), the band eventually swelled to a three-piece over the course of four full-lengths and a rake of singles/splits.

03. Streaming above in its entirety is fifth album Lisa Marie Airplane Tour. Recorded solo in Kelly’s new home of Spiddal, Co. Galway, the album reflects heavily on the little malaises of rural life with a warm smirk.

Between the hours of 6 and 9 p.m., I’m going to drive my increasingly dangerous and belovedly shitty ’02 Volkswagen Polo around Galway. I’m going to start at THE SMALL CRANE, right outside the Bell Book and Candle (should point out now that they are not official sponsors and should not be subject to any complaints from what may follow).

I’m gonna welcome 4 people who may wish to purchase the album into my car. SEATBELTS MUST BE WORN. I’ll be playing the album on cassette. I’ll drive ye out to Salthill and back. The drive should take 10 minutes. I’ll answer any questions you have about the album. I’ll drop you back at the Bell Book and Candle. You may purchase the album in whatever format if you are so moved. I shall then bring the next group off.

VERDICT: The sound of someone going not-so gently into that good night, but perhaps not wanting to cause a fuss either. Equal parts hilarious and presciently crafted.