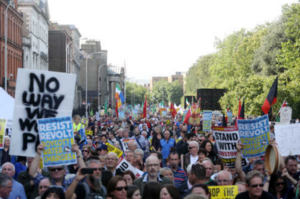 Diarmaid Ferriter misses the point about the movement against water charges. The key to understanding why hundreds of thousands of people have taken to the streets since 2014 lies not in a discussion about the abolition of rates during the 1970s but in the impact of austerity in this State since 2008.

The communities from which the water protests emerged were those who had suffered most from cutbacks under both Fianna Fáil and coalition governments. They were consistently told that there was no alternative to these policies. But the implementation of water charges was, for many, the straw that broke the camel’s back.

The fact that, despite derision from commentators, the movement not only sustained itself but grew, makes it more likely that people will feel that protest over housing, child poverty and numerous other issues may also be successful.

Anyone who wants to see a “civic-minded Irish Republic” should therefore be applauding those who took part in the largest social movement in this country for decades.

64 thoughts on “Missing The Point”