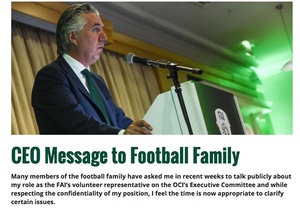 Over the past number of weeks, the Olympic Council of Ireland Rio Olympics ticketing issue has dominated the headlines and a number of serious allegations were made by a section of the Irish media suggesting involvement and wrong doing on my behalf. These allegations arose out of events in Brazil, in particular the issuing of a warrant against my passport by the Brazilian authorities.

As everyone should now be aware, this warrant was subsequently withdrawn, 10 days ago. In fact, the Brazilian police have never made any contact with me in relation to this issue.

When the issue of the warrant was first publicised in Brazil, certain media outlets took the opportunity to make the most serious and defamatory allegations against me.

My role as CEO of the FAI, it seemed, led to a significantly prominent positioning of this inaccurate and high profile reporting. These matters are now in the hands of my legal advisers and so I cannot comment further on them other than to confirm that I had no knowledge of or involvement in anything to do with tickets for the Rio games…..(more at link below)…

15 thoughts on “Gather Around Children”