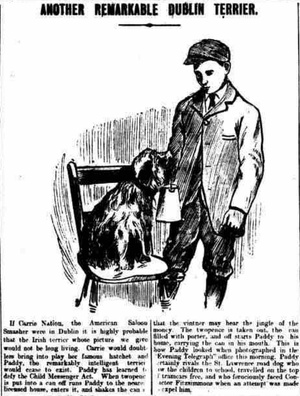 Kerry Blue Terriers were the favourite dog of General Michael Collins and perhaps he was influenced in his choice by Paddy, the famous Edwardian Dublin terrier, whose defiance of British-imposed licensing laws featured in a number of national and international papers in the Spring of 1902.

The previous year the Child Messenger Act 1901 – following on earlier legislation of 1872 and 1886 which prohibited the consumption of spirits and other alcoholic drinks by persons under 16 and 13 respectively – had prohibited the well-established – and often financially lucrative – practice of children collecting drink for adults from public houses.

Paddy’s young owner – not wanting to lose his profitable delivery service – decided to take advantage of the absence of any similar prohibition on dogs and train his ‘remarkably intelligent’ pet to carry out the work for him instead.

The method, as outlined by the Northants Evening Telegraph, which carried the above sketch of dog and master, was as follows:

“When twopence is put into a can off runs Paddy to the nearest licensed house, enters it, and shakes the can so that the vintner may hear the jingle of the money. The twopence is taken out, the can filled with porter, and off starts Paddy to his home, carrying the can in his mouth.”

With Chompsky on the staff, perhaps this scheme might also prove useful for the Broadsheet morning coffee?

The Girl In The Poster