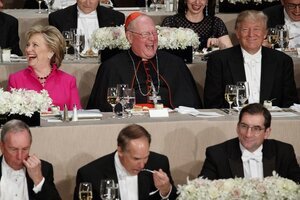 Highlights from Donald Trump’s roast of Hillary Clinton (and others, including his wife) at white tie fundraiser the Alfred E Smith Memorial Dinner in Washington DC last night.

Another email from Clinton aide Huma Abedin to Mook and Podesta in January 2015 details how Moroccan authorities donated to the Clinton Foundation’s Clinton Global Initiative (CGI) to get access to Clinton.

Abedin says the “King has personally committed approx $12 million both for the endowment and to support the meeting” and that “the condition upon which the Moroccans agreed to host the meeting was her participation. If hrc was not part of it, meeting was a non-starter.”

She goes on to say that the meeting had been Clinton’s idea. “Our office approached the Moroccans and they 100 percent believe they are doing this at her request,” Abedin adds. “She created this mess and she knows it.”

Best of the worst: Here are the most shocking WikiLeaks Podesta emails so far (RT)

Donald Trump is pointing to a stream of hacked emails as proof that Hillary Clinton would be a compromised president, but a surprising number of progressives are drawing similar conclusions — albeit for totally different reasons.

Some of the left’s most influential voices and groups are taking offense at the way they and their causes were discussed behind their backs by Clinton and some of her closest advisers in the emails, which swipe liberal heroes and causes as “puritanical,” “pompous”, “naive”, “radical” and “dumb,” calling some “freaks,” who need to “get a life.”

The very best of times.

Stuck In The Middle