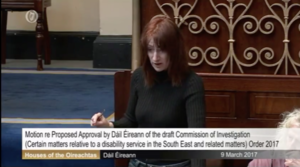 You may recall how, yesterday, the Minister for Disabilities Finian McGrath withdrew the proposed terms and conditions of a commission of investigation into ‘Grace’ and the alleged abuse she suffered at the home for 20 years.

His decision to remove them came immediately after stinging criticism of the proposed terms and conditions by Fine Gael TD John Deasy, from Waterford, and Fianna Fáil TD John McGuinness.

Mr Deasy alleged that there was a cover-up by the HSE, saying: ‘this was a concerted and organised attempt to hide information and conceal the truth by a clique of HSE managers‘.

Mr McGuinness recounted the experiences of other alleged victims of abuse who lived at the foster home and said if Mr McGrath’s terms and conditions didn’t include the 46 other people who stayed at the home, the State would be “heaping further abuse” on the families affected.

Specifically, Mr McGuinness said, before Grace, a 12-year-old girl was taken out of the home – after the school she attended told the girl’s mother she would attend school bruised, battered and beaten. Mr McGuinness said the girl’s mother made a complaint to the South Eastern Health Board in 1992 but was “… told to shut up. She was told not to repeat those stories. And she was threatened legally”.

This morning, the Dáil unanimously agreed expanded terms of reference which state the 46 other cases will be examined in a second module of the commission of investigation.

But it’s being reported that families of the 46 other cases and the whistleblowers remain unhappy with the revised terms.

“The whistleblowers added that while the revised terms state that phase two will undertake an investigation of the recommendations in the report of Conor Dignam SC, the terms omit Mr Dignam’s recommendation to look at “allegations of cover up”. This, they say, is of serious concern.”

Independents 4 Change TD Clare Daly TD spoke about the matter in the Dáil this morning.

And she raised concerns about the connection between law firm Arthur Cox, the HSE and Resilience Ireland, which last week published a 2015 report it was commissioned to do, by the HSE, on the Grace case.

“Minister, I have to say, the entire manner in which this has been addressed has been utterly shambolic and wholly unacceptable and I really hope that this does not come back to bite us.

“And the reason why it is particularly important that we get things right in this case is that we know that the backdrop is, at best, I suppose, economical-with-the-truth information being given, but, at worst, deliberate misinformation around these issues in previous attempts to resolve them so forgive us if we’ve trust issues where the HSE are concerned: we think they are legitimate.”

“Now, yesterday, we went into the meeting with yourself. We wanted to raise the issue of the draft order – the statutory instrument upon which the terms of reference were based. The first response we got was, ‘well, sure, God, nobody else raised that’. We want to address the terms of reference. We had to commission legal opinion from Eame’s solicitors to explain why the order had to be changed and that the terms of reference could be ultra vires if you didn’t do that.”

“We then went on to actually submit changes to the terms of reference – none of which were included I might add.”

“Now, no doubt, minister, you will argue that the order and the terms of reference, in the manner in which they have been changed, will allow us to address all of the issues that we have raised and that is possibly the case. And I seriously hope that that is the case.”

“But I found it ironic this morning that one of the amendments that we specifically had posed was the problem that was highlighted by the PAC [public accounts committee] – the fact that earlier attempts by people to get to the truth, including Government ministers and Oireachtas committees were deliberately thwarted by persons or persons unknown in the HSE. It’s an absolute fact.”

“In terms of the information put out, that the gardai were blocking publication of the reports – not even allowing ministers see them – we know it now that that’s not true.”

“We know in the case that I raised with Minister [Leo] Varadkar about a vulnerable person remaining in that facility up to 2015, the minister efficiently asked: are we sending anybody to this? And the answer, very cleverly, he got was: don’t be worrying, Minister. We’re not sending anybody, it might be a private placement but that’s sorted.”

“It wasn’t sorted. So they didn’t actually care about the truth or the person at the centre of it; it was all about covering up for the organisation. And against the backdrop of the Devine Report, which had been hugely discredited, the Resilience Ireland report terms of reference drafted by Arthur Cox who were the legal team that represented the HSE in the Grace case. You couldn’t make this up. Heads have to roll over this.

“I really hope that the changes have got it right and that we be proven wrong on this but there’s a lot hanging on it.”

Previously: ‘Examples Of What Is And Was A Cover-Up’

Grace And The Three-Year Gap

5 thoughts on “Grace, Resilience Ireland, Arthur Cox And The HSE”