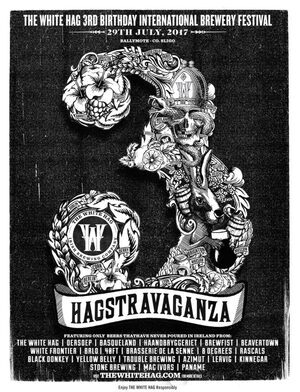 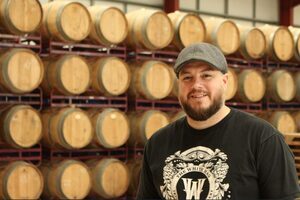 The White Hag is celebrating its third birthday by holding an International Brewery Festival next week, on July 29 in their brewery in Ballymote, County Sligo.

Hag BrewMaster Joe Kearns has been an outspoken advocate of beer tourism and a sustainable taproom culture.

Beer tourism is basically non-existent in Ireland. Sure, there are people trying to tour, and breweries trying to give tours, but the entire package is missing due to licensing laws.

Beer tourism could have a dramatic effect on the more rural parts of Ireland in several ways. For example, public transportation and infrastructure is severely lacking in these areas, so finding work as a young person who can’t afford to drive is nearly impossible.

Also, there’s a knock-on effect of bringing new money into the local economy. With an influx of new people comes the need for more accommodation, food services, souvenir shops, etc.

Taprooms in the U.S. have literally transformed old, abandoned industrial and warehouse districts into thriving, modern cultural centers. They’ve created a new economy in areas where the economy had all but packed up and left.

But its not just about advocating for beer tourism. At the core of us hosting a beer festival is the theme we’ve built it around, bringing beer never poured here before to Ireland. And its not just about new beer. It’s important for breweries, like us, who have a high focus on export to bring other brewers ‘home’.

It enables a small, relatively unknown brewery, to enter a market attached to an established brewery, at a significantly lower, or zero cost. Working across borders also breeds and feeds innovation, the life blood of our fledgling industry.

Innovation in the brewing industry is happening everywhere, and Irish brewers are quickly catching up to the bigger markets.

The country is miles ahead of where it was compared to 2013 when I first arrived. There’s always room for more innovation, and we strive to lead by example.

We’re bringing in beers and ciders and meads, along with the good people who make them, from Ireland, Europe, and North America, and they’re all products that have never been available in Ireland before.

I guess for us it’s about celebrating our birthday by celebrating the growth and diversity of this industry. This is the best industry in the world. It’s full of great people and great beers, and a lot of them will be here!

Are You Dreaming Of A White Hag Christmas?

14 thoughts on “Beer Tourists On Tap”