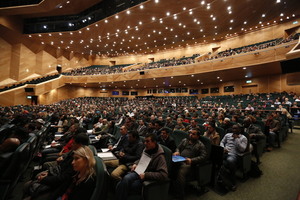 A citizenship ceremony in the Convention Centre, Dublin

What kind of immigrants are OK in Ireland?

I have a friend. She’s an immigrant, although she never thought of herself that way until recently when she began to receive negative comments on social media about not being Irish.

She’s married to an Irishman, although 9 months into the marriage she found herself in the court before a judge getting a barring order to protect herself. The judge granted it readily, and extended it to include my friend’s sons as well.

My friend first came to live in Ireland over 20 years ago, but as fate would have it, never lived here the continuous 5 years required for citizenship. Ireland is her home, as it is her son’s, and she will be seeking citizenship within the next 18 to 24 months once she is eligible.

In the meantime, she is indeed legally resident here.

My friend is very outspoken. She was an advocate for political and social reform in her country of origin, as she is here in Ireland. She seeks fair services and timely health care for all, but especially for disabled children – which is her passion. You see, her eldest son is severely disabled.

She fights daily, not only for her son’s care, but for the hundreds of other children like her son across Ireland. She speaks out against homelessness. And while she asks for help, she certainly also gives help to others.

Yet, there are those who think she has no right to speak out against what is so obviously wrong with our healthcare system; no right to seek assistance for her son despite the fact she is a legal resident; and no right to receive any assistance from the government at all.

If my friend was Syrian, would it change these people’s minds or would it only enhance their position that as an immigrant she should not speak out and not receive any help?

What if she was Polish? Mexican? Does it matter what country my friend is originally from, and if so, why does it matter?

44 thoughts on “Ask A Broadsheet Reader”