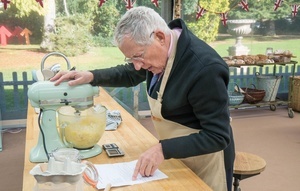 Sorry tis a day late lads, I was off getting me bits done for Paddy’s weekend so I was caught for time.

No time wasting so first things first; no disputing the winner ah’tall.

It was one of those rare Bake-Off occasions that the Star Baker was top bun in all three bakes. On a side note, I found the lad, Perri Kiely, the big haired dancing cutie a daycent sort who clearly took every ounce of pleasure he could from the experience, from being in the tent, to getting the handshake to winning the technical etc.

The sort that doesn’t pretend they never heard of Bake Off and is handy enough to know the difference between plain and self-raising; but wouldn’t fret if his pastry wasn’t flaky enough.

He’s a proud and an as long as I like it type of baker. In fact t’wouldn’t surprise me to learn he was one’ah the real Kiely’s (although having been in school with Mattie’s eldest I doubt it since none’ve ‘em were over 5 feet and weren’t the fittest or most athletic.)

Having said that Ricky the Rockstar ()) took it all very seriously and fancy didn’t he? Feckin’ Seaweed Scones and Anchovy Butter, shur’ that’s Masterchef carry on. Although I will have ta’ get me hands on that Choux recipe – more about that in a sec.

Then there was Dagenham Stace. I always had a bitta’ve soft spot for Stacy as I remember being told she was from the Avenues. A series of terraces in Dagenham I know well as my grandparents lived on 3rd Avenue, and subsequently my Aunty Dee, who btw could burn cream crackers and curdle packet gravy if she was left anywhere near a cooker.

But Christ those eyelashes were as off putting as the blinding bleached teeth. Pure Dagenham Barking Romford I know, but I was waiting for The Hollywood to find one of the eyelashes in her bakes.

Yet still there is something very genuine about her and I would love the lemonade and blueberry scone recipe myself. And she’s not the worst with a spatula and la-di-dah mixer.

So, Posh Nick. Like, what’s left to say since Tuesday night since you’d swear he won the main gig with all the chatter? Well I’ll give it a go, I think it’s unfair to consider him the useless one in the bake off tent because he has actually never done anything in a Kitchen, and probably never turned on an oven in his life.

I also have to respect the fact that he kept going, and actually put something in front of Pru n’ Paul, nor did he flap or throw a wobbler once; unlike the Paddy that time with the melted Ice Cream.

The boss here was skitting laughing at him, I wasn’t meself now although his wryness wasn’t tedious, but I was surprised he was as immaculate at the final judging as when he arrived into in.

Shurt n’ Tie with an apron, the only other time I’ve seen that was Mark D’Arcy in Bridget Jones. Never the twain…please, Mark D’Arcy should be a protected UNESCO sum’ting.

So Choux got the better of Lord Nick Hewer. I don’t feel so bad meself now. But I made a promise here the other night; when the new kitchen is in Cork’embouche will be the Champagne off the side of it.

The Hollywood’s Devil Food cake  isn’t a bad recipe if anyone wants to give it a lash. Vanilla Paste is about the only thing you might have to search carefully for as it wouldn’t be an Spar/ Aldi/Lidl thing normally. I’m not a fan of only Chocolate but I know most people love Chocolate Cake, and one fact about all his recipes, if you follow it exactly – and I mean chemical explosives exactly, it’s supposed to work.

39 thoughts on “A Hewer For The Cakes”