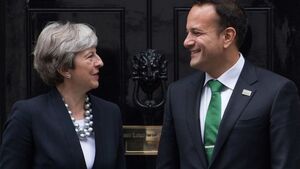 I opened my third Broadsheet column with a 1962 quote from the former US Secretary of State, Dean Acheson:

“Great Britain has lost an empire and has not yet found a role”.

When that column appeared at the end of May 2016 the U.K. Brexit referendum vote was still three weeks away. We still had hope.

Almost two years later and Acheson’s quote seems truer than ever. Over the past few weeks we have seen increasing evidence that the UK Cabinet is incapable of agreeing a common and unified position on the Customs Union and the Single Market.

On one side you have the beleaguered Prime Minister and Tory leader arguing for a “customs partnership” that would see the UK just outside the existing EU Customs Union but remaining so aligned with it and EU standards as to render borders unnecessary.

On the other, you have the arch-Brexiteers like Boris Johnson, Michael Gove, and Liam Fox claiming that any form of customs partnership either renders their plans for great trade deals for the UK with China, India and Burkina Faso redundant or is tantamount to staying in the customs union and “ties” the U.K. to a E.U. that they want to leave a mensa et toro.

What is odd about the Brexiteers current manoeuvres is that some form of customs partnership or association has been on the table from the British side, almost since Day One of the Article 50 Brexit negotiations.

Speaking at Lancaster House in January 2017 from a text that had been signed-off on by her Cabinet, Theresa May said:

“But I do want us to have a customs agreement with the EU. Whether that means we must reach a completely new customs agreement, become an associate member of the Customs Union in some way, or remain a signatory to some elements of it, I hold no preconceived position. I have an open mind on how we do it. It is not the means that matter, but the ends.”

Showing that the Brexiteers are preoccupied with means, not ends, one of that faction’s spiritual heavyweights and living embodiment of what Dean Acheson was talking about, Jacob Rees Mogg, took their argument several steps further on ITV’s ‘Peston Show ‘on Sunday claiming that some architects of the Good Friday Agreement were engaging in “disgraceful” politics, seeking to keep the U.K. in the EU.

In other words, how dare anyone on this side of the Irish Sea attempt to remind the UK of its many obligations under the Good Friday Agreement, a binding international treaty between two sovereign governments.

He was not the only one at it.

The former UK Ambassador to the US, Sir Christopher Meyer was attempting to use the Good Friday Agreement to threaten Ireland and the rest of the EU 27 with a no-deal Brexit and a hard border across the island.

In a bizarrely intemperate tweet the ex- diplomat accused the EU of weaponizing the Irish issue and predicted that the EU would “either fracture the UK, betray the GFA by promoting a united Ireland through the back door, or betray the referendum-or a mix of all three.”

This is shameful stuff. One of the great achievements of the Good Friday Agreement, and its many architects, is that the Agreement explicitly recognises re-unification by consent as a legitimate aspiration.

To try to perversely claim that the momentum to re-unification that has been prompted by this Brexit madness is somehow a betrayal of the Good Friday Agreement, is reckless and indicative of desperation.

Yet, this is the level of inanity to which some British political leaders, though it would be far fairer to say English, have descended. Sadly, not all of them on the right either, but more of Corbyn and his empty opposition on another day.

Though it was made in the wake of Suez crisis and the declining British influence on the World stage, Acheson’s wider comments are harsh but extraordinarily prescient. His analysis of Britain’s predicament is not as glib as the one-liner might suggest and could, with just a few tweaks, be applied to the current saga.

According to report of his remarks in the Guardian on December 6th 1962:

Mr Dean Acheson, former United States Secretary of State, asserted today that Britain’s role as an independent Power was “about played out.”

He told a conference on American affairs at West Point Military Academy that Britain had lost an empire and had not found a role.

H e added:”Britain’s attempt to play a separate power role – that is, a role apart from Europe, a role based on a ‘special relationship’ with the United States, a role based on being the head of a Commonwealth which has no political structure or unity or strength and enjoys a fragile and precarious economic relationship – this role is about played out.

“Great Britain, attempting to work alone and to be a broker between the United States and Russia, has seemed to conduct a policy as weak as its military power.” Mr Acheson is President Kennedy’s special adviser on NATO affairs.

Mr Acheson said that Britain’s application for membership of the Common Market was a “decisive turning point.” Should Britain join the Six, “another step forward of vast importance will have been taken.“

It is both painful and difficult to watch our nearest neighbor and onetime steadfast EU ally turning back the clock and leave the institutions of the EU that have brought us closer together, but that is their decision and they have decided that this is what they must do.

But – to revive another political (mis)quote from the 60s, though this time closer to home – we cannot be expected to stand idly by while their ill-judged and impulsive folly inflicts damage and cost on this island and this jurisdiction.

5 thoughts on “Derek Mooney: There Is No Future In England’s Dreaming”