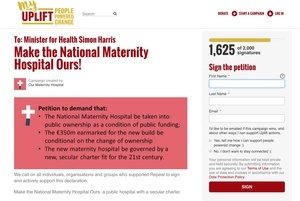 A new petition has been set up on Uplift concerning the National Maternity Hospital calling for the hospital to be placed in public ownership.

The petition was created by the Campaign Against Church Ownership of Women’s Healthcare group.

Despite its name, the National Maternity Hospital is a private Catholic corporation. The hospital recently agreed to be taken over by a private company owned by the Sisters of Charity, St Vincent’s Healthcare Group (SVHG), which manages the nuns’ three hospitals.

The National Maternity Hospital is now slated to get a new facility built by the government on land owned by the nuns. This new build will cost an estimated €350m.

Contrary to what the Minister for Health has repeatedly claimed, the State will not own the new hospital. All the government will own are the bricks.

Current plans will see the maternity hospital governed by the nuns’ company, SVHG, and owned by a new private Catholic company to be set up by SVHG.

The Minister also claims the new hospital will be free of religious influence. Such claims ring hollow. With private ownership come legal powers and privileges. Private hospitals cannot be forced to provide services that conflict with their ethos. They cannot even be compelled to submit to independent inquiries into patient safety, as a High Court case taken by the same National Maternity Hospital against the Minister shows. The hospital recently won its case, blocking a HIQA inquiry following the death of a 34-year-old woman during surgery at the hospital.

The new maternity hospital was designed to be private and Catholic. We demand that it be public and secular.

Meanwhile, in The Sunday Times.

Justine McCarthy, in her opinion column, wrote about the matter, saying:

Whatever vestige of blind faith Ireland still has, is preserved for the brides of Christ.

While male clerics have been all but stoned in the public square — regardless of their age, state of infirmity or personal goodness — nuns are popularly depicted as frail innocents.

Whenever the ghosts of nuns’ past outrages come back to haunt us all, up goes the refrain that society was the real culprit.

…This is not to say that innocent individuals, whether priests or nuns, ought to be vilified, for they should not, but it is to advocate that the same standards of accountability and vigilance apply equally to male and female congregations who oversaw institutional atrocities.”

5 thoughts on “‘We Demand That It Be Public And Secular’”