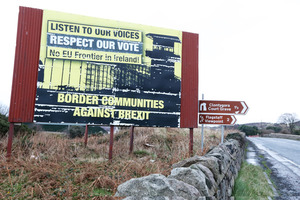 At the border between Newry and Dundalk

The dossier marked “official-sensitive” prepared for the EU Exit Negotiations Board is dated 28 August.

It details how the findings of all advisory groups informing the government on the Northern Irish border are being kept deliberately under wraps to try to avoid hampering Britain’s intended renegotiation of the backstop agreed to by Theresa May.

…..Border solutions the report deems as having the most potential are listed as:

A Northern Ireland sanitary and phytosanitary zone to track contamination and disease.

There were significant concerns about an artificial intelligence option, which experts felt might not detect disease and chemical contamination of food.

Onboard vehicle technology which could track the location, weight and temperature of goods was also considered risky if a lorry might suddenly be taken out of service and goods offloaded into a non-registered vehicle.

Physical goods checks through mobile units could take weeks and involve lengthy periods of quarantine, the report found. The units could also be vulnerable to “targeting” and staff could be at risk, it said….

How Do We Get Around This?