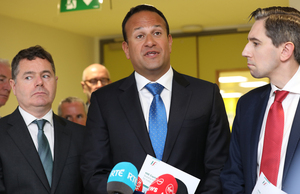 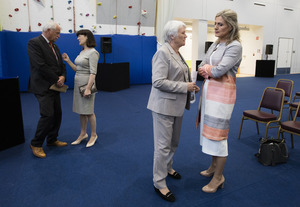 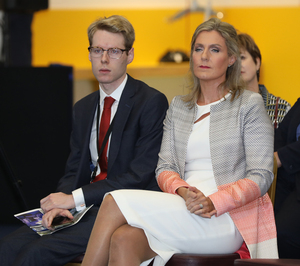 Fine Gael TD, Maria Bailey (above right and pic 2 with Catherine Byrne TD)) joined, top from left: Taoiseach Leo Varadkar, Minister for Finance Paschal Donohoe and Minister for Health Simon Harris at the launch of the government’s publication of the HSE Capital Plan in the National Rehabilitation Hospital, in Ms Bailey’s constituency.

Minister for Health Simon Harris said the plan provides certainty for capital spending for the next three years and will deliver 250 projects.

Earlier, speaking on Today With Seán O’Rourke, Mr Harris said all of the projects promised, under Project Ireland 2040, are now secure.

He said some of the projects have already started and there were no projects delayed as a result of the increased cost of the National Children’s Hospital.

“There’s genuinely no delayed projects and the reason for that is quite simple. Paschal Donohoe made a decision in the Summer Economic Statement, which has allowed me to do this, where he set aside what he called a reserve, and that reserve is to meet the cost of the children’s hospital and the cost of broadband. It allowed to me to give the HSE certainty over its funding for 2020,” he added.

19 thoughts on “Swing By Anytime”