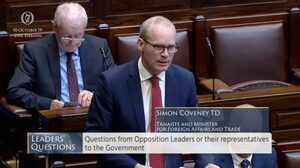 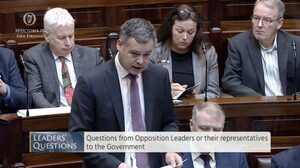 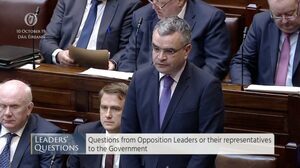 Opposition TDs raised the High Court revelations that officials from Dublin City Council were aware and recommended that protection money be paid to two violent criminals so that council houses could be built in west Dublin.

“It is my firm belief that if this work does not progress then we are condemning Cherry Orchard to a future of dereliction and abandonment. No homes or services will be built until this criminality is comprehensively tackled.”

Mr Doherty said Mr Ó Snodaigh requested a meeting before the new year but received no response from Mr Coveney.

On 5 January 2017, Deputy Ó Snodaigh again wrote to Co-operative Housing Ireland, Dublin City Council, the then Minister for Justice and Equality, the then Minister of State with responsibility for communities, the Garda and the Tánaiste in his former position of Minister for Housing, Planning, Community and Local Government.

“The correspondence was directly addressed to the Minister.

“Deputy Ó Snodaigh informed all recipients that matters had escalated</strong, with criminal elements setting out conditions of commencement of construction works, with the Garda and Dublin City Council both aware of it.

“He again requested a meeting with the Minister for Justice and Equality, the local superintendents and others to ensure the site would not be compromised and that the demands of criminals would not be accepted.

“He requested that a Garda task force be set up to ensure work on the site could commence without workers, security staff or the Cherry Orchard development being held to ransom by criminal demands.

“Deputy Ó Snodaigh stated in his letter that he was of the firm belief that if there was submission to the demands of these criminal elements, there would be contagion, not only for other sites in Ballyfermot and Cherry Orchard, but throughout the city as word of capitulation would spread.

“On 13 January 2017, more than two weeks after my colleague’s initial letter, the then Minister for Justice and Equality declined a meeting, with no response from the Tánaiste in his then role of Minister for Housing, Planning, Community and Local Government or acknowledgement of either letter sent to him directly.

“On Tuesday, approximately three years after my colleague’s request for engagement with the Departments dealing with housing and justice, as well as the Garda, the High Court was told that Dublin City Council either paid or instructed contractors to pay protection money totalling more than €500,000 on three separate sites, including the Cherry Orchard site.

“The Criminal Assets Bureau has stated that a council official arranged payments, with the council denying the allegation. We have heard the court has opened an initial investigation but that does not go far enough.

“We need to know what others knew and why so many, including the then Minister for Justice and Equality and the current Tánaiste, did nothing despite being warned of the intimidation against site staff by these criminal elements as early as 2016.

“The current Minister for Housing, Community and Local Government, Deputy Eoghan Murphy, has stated he only learned about this the day before yesterday.

“We have now learned that criminal elements have been paid €500,000 from the public purse. Will the Tánaiste explain to this House his inaction on this serious matter?”

The Tánaiste Simon Coveney told Mr Doherty that it wasn’t correct to say Ms Fitzgerald refused to meet with Mr Ó Snodaigh and rather that there was an ongoing Garda investigation.

He then read out Ms Fitzgerald’s response to Mr Ó Snodaigh.

“I am advised by the Commissioner that gardaí are pursuing a thorough investigation of the incident in question and are engaging with all relevant parties with a view to facilitating the safe return of contractors to the site.

“I understand that following local protests, construction work had been temporarily suspended to allow for discussion of the issues in dispute.

“While gardaí encouraged all parties to resolve their differences, there was continuing opposition when works resumed and it was at this juncture, on 19 December, that the shocking petrol bomb attack took place.

“I am advised that Dublin City Council, quite understandably, felt it was necessary to suspend work on the site.

“I am further advised that local Garda management has instituted a specific crime prevention initiative, with regular patrols on the Oranmore Road, Cherry Orchard and Croftwood areas, including the construction site.

“I also understand that a meeting has been arranged for today, Friday 13 January, between local gardaí, Co-operative Housing Ireland, Dublin City Council and the security firm which is contracted for the construction project.

“With reference to the suggestion that criminal elements may be attempting to extract protection money, I am advised that gardaí have not received complaints to this effect.

“Needless to say, I would urge anyone who may have relevant information to support such a serious criminal allegation to provide full details to the Garda without delay.

“In view of the foregoing, An Garda Síochána is clearly the most appropriate authority to deal with the present situation and, especially as a Garda investigation is ongoing, I do not feel that a meeting between us would be appropriate at this time.

“You will appreciate that it is not open to me to intervene in particular Garda investigations.”

Mr Coveney went on to say:

“Deputy Ó Snodaigh did good work here and raised issues that were genuine. What I am saying is that I was not aware of it.

“If I was, I would have raised it with the Minister for Justice and Equality. I am not saying emails were not sent to my office.

“I am trying to understand what happened in this regard. However, I am also saying that the appropriate response was from the Minister for Justice and Equality. This is a Garda issue, and was a Garda issue at the time.

“That is what I read out in the context of the response that the Tánaiste at that point, Frances Fitzgerald, made. I am not disputing that this a serious issue. It was raised and sent to my office.

“We did not respond to the Deputy, as far as I am aware. That is because I was not involved. Whether I should have been is a different issue, but I did not have this issue raised with me and, therefore, I did not speak to the Deputy or respond to him.”

Meanwhile, Fianna Fáil deputy leader Dara Calleary likened reports about the matter to “something from a mafia documentary or The Sopranos”.

“The Minister of State, Deputy Catherine Byrne, was informed of this by Deputy Ó Snodaigh and says she passed on the information to the Garda. She has not said, however, whether she passed it on to the Minister, Deputy Eoghan Murphy, who said the first he had heard of it was yesterday.

“We also know, as of this morning, that the office of the then Minister for Justice and Equality, Frances Fitzgerald, was informed of the case and that an acknowledgement was issued that the letter had been received.

“She did not, however, follow it up with a meeting. Again, this suggests there was knowledge in government of a problem at Dublin City Council and that nothing was done about it.

“In September 2016 the Evening Herald carried a front page story about the issue. It led with the headline, BLOODBATH MOB GUARD COUNCIL SITE.

“The Tánaiste was Minister for Housing, Planning, Community and Local Government in September 2016. Did he not follow up on the story?

“Is this common practice within the local authorities? Has the Government done anything in the past 48 hours to get a sense from Dublin City Council of what is happening and what went on?

“Does the Tánaiste think it is appropriate for Dublin City Council to carry out its own investigation, or should the Government appoint an outside investigator to get to the bottom of the matter?

“What is going on at the heart of Government?”

“…we are trying to establish what happened and when, who sent emails to whom and what action was taken as a result.

“As the then Minister for Housing, Planning, Community and Local Government, I can say there was certainly email correspondence with the Department of Justice and Equality through various email traffic routes.

“My office was cc’d in some of that email traffic, but the first I heard of the issue was yesterday.

“We are now trying to establish the communication lines for the email traffic, but one thing is clear: the concerns expressed and accusations made were matters for An Garda Síochána.

“The then Tánaiste and Minister for Justice and Equality, Frances Fitzgerald, responded comprehensively to Deputy Ó Snodaigh who was raising the issue and confirmed that it was a matter for An Garda Síochána, that an investigation was ongoing and that if people had concerns, they should talk to the Garda about them.

“I have the email in front of me. Because of the accusations made and their seriousness, we need a completely independent investigation…”

“…I only learned about the issue yesterday and, to be honest, only focused on it this morning when I asked for the email traffic into and from Ministers’ offices and so on.

“As I said, Deputy Ó Snodaigh raised the issue. The email he sent was cc’d to a series of people. He did not copy it to me, as the then Minister for Housing, Planning, Community and Local Government, but when one of the people who received the email, in Co-operative Housing Ireland, responded to him, my office was cc’d in that email.

“I am trying to establish what happened in that regard, but what I know for sure is that the then Minister for Justice and Equality sent a comprehensive response to the Deputy. She was the appropriate line Minister.

“This was an illegal act. Intimidation was going on and serious concerns were raised legitimately by colleagues in this House.

“Yesterday was the first I heard of it and we will now follow the trail of who knew what and when, as well as the responses. The appropriate Minister responded and this is a Garda matter.”

Meanwhile, this morning, The Irish Examiner reports that Housing Minister Eoghan Murphy has scrapped Dublin City Council’s planned investigation into the matter and that he will launch his own independent investigation instead.

Yesterday: “I Tried To Roar It From The Rooftops And Was Met With Deafening Silence”

‘No Payments Were Made By The City Council’

4 thoughts on ““What Is Going On At The Heart Of Government?””