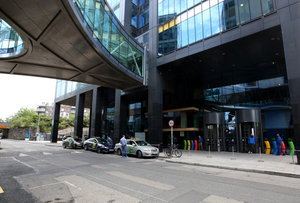 Google has entered into talks in relation to the rental of all 202,000sq ft (18,766sq m ) of space at the Sorting Office, the seven-storey office block being developed in the Dublin docklands by Pat Crean’s Marlet Property Group.

Should a deal be agreed, the accommodation at the Sorting Office would provide Google with enough room to grow its existing 8,000-strong Dublin-based workforce by up to 2,000 employees. A spokesperson for Google declined to comment.

The news of Google’s negotiations with the Sorting Office’s Singapore-headquartered owner, Mapletree Investments, comes just three weeks on from The Irish Times reporting of the US tech giant’s agreement to lease more than 75,000sq ft (7,000sq m) of office space in Block I at Green Reit’s Central Park scheme in Sandyford, Dublin 18.

The View From Google Dublin Now