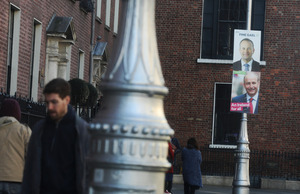 Is there any justification, any rationalisation in maintaining that election 2020 is a two-way race between Fianna Fail and Fine Gael? 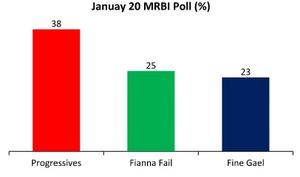 In the Irish Times/MRBI poll – the first poll whose fieldwork came after the election was called – the Progressive bloc garners 38 percent of the vote, with Fianna Fail trailing at 25 percent and Fine Gael falling further behind at 23 percent.

The two conservative blocs total less than half the vote.

Earlier this month I suggested this contest could be seen as a three-way contest. The first two polls (the Sunday Times B&A poll having come out on Sunday) seem to confirm that.

But we shouldn’t be too surprised. The growth in support for progressive parties has been growing since the early 1980s. During much of this time, this growth was taking place below the radar as we were still captured by the idea that Irish elections are a contest between Fianna Fail and Fine Gael.

Now, however, that growth gas burst into and throughout the radar. Indeed, support for Progressive parties is now beginning to challenge the combined strength of the two conservative blocs.

Of course, there are the usual caveats: this is just one poll; it is ‘early days’, etc. Parties can grow or fall back over the course of the campaign.

A real problem is that, not being cohesive, there may be a problem in maximising seats between progressive parties (though, as pointed out previously, voters are increasingly transferring within the progressive bloc). These and other questions will fuel speculation in the days ahead.

However, this speculation should be rooted in the fact that the first two polls show that Progressives are contenders, not also rans, not just mere fillers for a conservative-led coalition.

The challenge is to build on these results. In an earlier post I suggested a modest strategy for progressives – to boost the votes of all progressive parties (the party of your choice) and to urge progressives to transfer within the bloc to maximise seats.

Most of all, progressive parties – activists, spokespersons – should now start acting and talking like poll leaders.

We need to convince more people that progressive policies will make a real and positive impact on their day-to-day lives.

To do that requires people having confidence in the candidates and parties they vote for. We should start acting like the leaders that the polls show that we are.

Now is the time for trade unionists to make these arguments, either individually or collectively.

Now is the time for civil society activists who might not be associated with any particularly party to urge support and transfers for progressives.

And it is time that party activists to make their voices heard within their own party. Support for progressives has never been higher in an election poll. Let’s not throw away the opportunities this presents.

It might be a stretch to say that the old order is collapsing while the new order is trying to emerge. History rarely vindicates poetic aspiration.

The question is – are we listening?

21 thoughts on “Michael Taft: The Progressive Bloc Opens Up a Significant Lead”