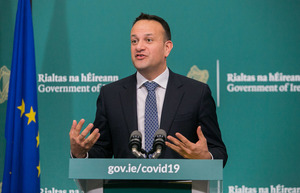 Taoiseach Leo Varadkar has said there is unlikely to be 15,000 confirmed cases of the coronavirus in Ireland by the end of this month as he had previously warned.

However , Mr Varadkar warned against any complacency in the fight against the spread of the disease.

Mr Varadkar said in recent weeks that the number of cases could reach 15,000 by the end of March, but with 1,329 confirmed cases as of Tuesday night, this level is unlikely to be reached in the next week.

Speaking during briefing at Government Buildings in Dublin, Mr Varadkar cautioned that while this accounted for confirmed cases, “there are many, many more cases out there that are not confirmed”.

The Skype Is Falling

“This Is The Calm Before The Storm”