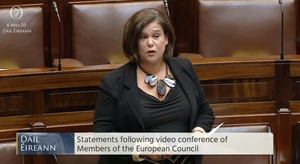 Ms McDonald said cutting or tapering off these would be “wrong” and said even the idea being floated suggests that Fine Gael is “out of touch” with the lives of workers and families and those bearing the burnt of this “economic shock”.

She also added that “in the last economic crisis”, FG and FF “chose to protect the banks and the wealthy”, “that you chose to punish ordinary workers and families instead” and “they lived with the minimum wage being slashed” and “numerous cuts to child benefit”.

She referred the moves to “slash and burn policies aimed to service a debt that did not belong to the people“.

During his response,, Mr Varadkar said the payments would need to continue until people can return to their jobs and, for the vast majority of people, returning to work won’t happen by June.

“So yes, it will need to be extended beyond mid-June,” he said.

“I am sorry though that Deputy McDonald chose to become some party political in her contributions because what you said was so two-faced and so fundamentally dishonest.

My party, Fine Gael, never cut the minimum wage. Working with Labour and then Independents, we increased it by 25%, one of the highest in the world.

What is the minimum wage in Northern Ireland where Sinn Fein is in power. In this jurisdiction, a Government led by my party, introduced a pandemic unemployment payment of €350 a week. So that people who lost their jobs had some financial security.

What happened in Northern Ireland where Sinn Fein is in office? A hundred pounds a week. Nothing for the self-employed until June. And Sinn Féin ministers on their Facebook site promote the fact that they hand out food parcels to the poor.

Reminiscent to me of Donald Trump handing out toilet roll after the hurricane hit the islands in the Caribbean.”

Varadkar: “…you can’t hide the fact that she’s also leader of an All-Ireland party, a party that’s in power in Northern Ireland where the minimum wage is lower than here, where you don’t give people 350 pounds a week. You hand out food parcels and boast about it on Facebook. I’d be ashamed to do something like that.

Ms McDonald said she was glad to hear the Taoiseach confirm that the payments would be extended beyond June. She then asked if he’d indicate how long they would be extended and if payment amount would remain the same.

She also said that grants of 10,000 or 25,000 pounds are being made available to businesses across all sectors in the North and added:

She also said she’s proud of the community work that Sinn Féin activists do across Ireland.

During his response, Mr Varadkar said no decision has yet been made on the rate of pay or the timeline of the extended payments and indicated it may be something for the next Government to decide.

“I think it’s a great thing by the way that people do provide food banks and hand out food parcels. And this Government actually funds food banks and we’ve done that for a very long time. What we don’t do is post on Facebook pictures of our ministers visiting them and handing out food to the poor…”

“Sinn Féin ministers promote the fact they hand out food parcels to the poor. I’d be ashamed to do something like that,” says acting Taoiseach Leo Varadkar.

“There Aren’t Wider Implications For Families Or For The Community”

62 thoughts on “Lou Rolls In A Hurricane”