Paul Cullen: “The other thing I noticed, from reading through that report from the CSO. Obviously our peak of deaths occurred in April of this year.”

Cullen: “The peak of deaths in 2017 and 2018 occurred in January. They’re actually the same size, the whole three peaks. Would you draw any conclusions from that? In fact, the one in 2018 is slightly higher than the one this year.”

Cullen: “2018 is just marginally higher than the one…I mean there was a lockdown but…”

Cullen: “There was obviously a lockdown in April.”

Holohan: “Yeah, there’s always a peak in mortality in the winter time. We’re well used to seeing that. And it occurs in every, every developed country and we’ve seen these reports through the European mechanism which is the European Mortality Monitoring Mechanism, the Euromomo which I’m sure you’re well familiar with, and established the same sort of pattern. I haven’t had a chance today to study the CSO, I believe they just published that today and I simply haven’t had a chance to study the detail of that today so I’ll wait to study that before I comment on your specific question.” 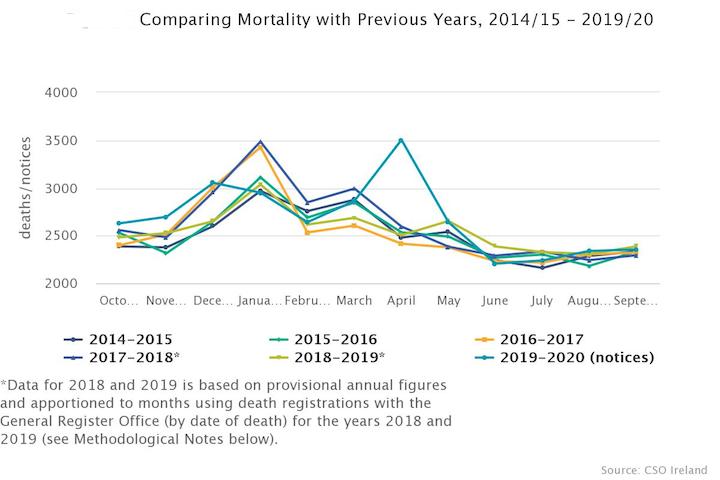 Central Statistics Office statistician John Flanagan spoke to Bryan Dobson about a report by the CSO, involving an analysis of death notices on RIP.ie, which shows that excess mortality for between March and September 2020 is estimated to be between 876 and 1,192 deaths.

Bryan Dobson: “When you say there has been, more, excess mortality in the order of 1,192, what are we talking about? What are you comparing it with?”

Dobson: “So in relation to Covid then, it’s quite clear that Covid has, or well, it’s certainly, it’s indicated by these figures that Covid has contributed to an increase in deaths since the pandemic began earlier this year?”

Flanagan: “Yes, absolutely. So essentially, in a sentence, what you could say is between 900 and 1,200 people are dead who would otherwise have been alive at the beginning of October 2020.”

Dobson: “But that is still below the official figure from the Department of Health for Covid-related deaths, I think which is in excess of 1,900. So how is that explained?”

Dobson: “There’s also another pattern which you observed and that is that many of these excess deaths are concentrated in the earlier part of the period and I suppose when the pandemic was at its height and have, well, largely tailed off into the month of September?”

Flanagan: “That’s right, yeah. So we’ve seen the death rate, the numbers of deaths return to normal, as what we would have expected to see.”

Dobson: “So for the month of September, is there any excess mortality, any indication that Covid has caused additional deaths?”

Flanagan: “No, nothing really out of the ordinary.”

Dobson: “So what lessons then do you draw from this in relation to how the pandemic is being understood?”

Flanagan: “Well, you know, all we can really discuss on the basis of this analysis is what we’ve found based on death notices. I can’t, I’m not really sure if I’ve answered your question there Bryan.”

Dobson: “Right. Maybe that’s for others to give some consideration to.”