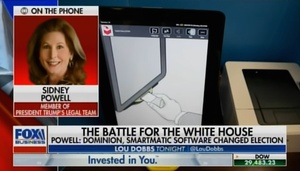 US President Donald Trump’s attorney Sidney Powell said the Trump camp is pressing forward with legal action targeting election officials as they certify the 2020 results in several key battleground states that have been called for Democrat nominee Joe Biden.

Earlier, Powell appeared with former New York City Mayor Rudy Giuliani and other members of Trump’s election legal team at a chaotic press conference to allege a plot by his opponents to “rig” voting machines in the presidential election, ‘delivering’ the race to Biden…

“Are you pressing forward with legal action against them for those violations?” Dobbs asked, referring to two specific voting machine companies, Dominion Voting Systems and Smartmatic.

“Not against the company and the software,” Powell responded. “But the suits will be against the election officials to invalidate the results of the election and force it to the legislatures and the Electoral College and then the Congress if necessary.”

Before the warning, Powell asserted that Dominion and Smartmatic are “inexplicably intertwined.”

Trump allies have also claimed that Smartmatic owns Dominion, but there is no evidence a partnership exists between the two. Both companies say they do not collaborate with each other in any way.

Ms Powell was asked about servers that were reportedly confiscated in Germany.ook

Lou Dobbs: “There have been great controversy as you know about the reports on a raid on a company Scytl in Germany which held election data presumably… Can you tell what actually did happen there and what you do know?”

Sidney Powell: “Well I know that is one of the server centers. There is also one in Barcelona. So it is related to the entire Smartmatic-Dominion operation. We do not know whether the good guys got the servers or whether the bad guys go them. Being on the outside of the government we simply don’t know. I’m hoping it’s the good guys and if they have that then there should be scads of evidence of frankly an international criminal conspiracy of the worst sort.”

Lou Dobbs: “And the presumption then is that they had the records on those servers of all of the votes that were processed by Dominion or Smartmatic.”

Sidney Powell: “Yes, the way it works is either the votes can be changed on the ground as they come in. People can watch the votes stream in live. For example there was a Dominion employee, high up, at the Detroit Center on the night of the election. He could have watched the votes come in live and manipulated them in that process. It could have run an automatic algorithm against all the votes which we believe is what happened originally and then the machines had to stop and the count had to stop in multiple places because President Trump’s lead was so great at that point that they had to stop the vote counting and come in and backfill the votes they needed to change the results.”

The Irish group Paragon has finally announced the purchase of the Catalan electronic voting company Scytl. It did so through a relevant fact to the National Securities Market Commission (CNMV) of its other investee in the state, the reprographic company Service Point. With this operation, Paragon guarantees the immediate future of Scytl and saves the nearly 140 workers from the creditors’ bankruptcy that was launched in December last year…

Service Point links the purchase of Scytl and will guarantee jobs (Archyde, October 23)

‘They Were Built To Do This Very Thing’

Dominion refused to show up to the PA state legislature https://t.co/355gDVYUxU

‘They Were Built To Do This Very Thing’

31 thoughts on “Voting Through The Back Door [Updated]”