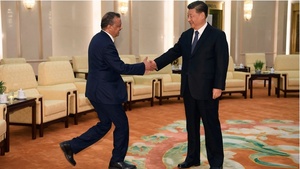 WHO Director-General Tedros Adhanom Ghebreyesus (left) with Chinese President Xi Jinping before a meeting at the Great Hall of the People in Beijing, China last January

The head of the World Health Organisation (WHO) says he is “very disappointed” China blocked the entry of its investigators.

Tedros Adhanom Ghebreyesus’ team had been due to investigate the origins of Covid-19 in the Chinese city of Wuhan.

Beijing has barred the entry of a 10-member World Health Organization team investigating the origins of the coronavirus pandemic after their visas were not approved.

Tedros Adhanom Ghebreyesus, WHO director-general, said on Tuesday that he was “very disappointed” after China blocked the arrival of the virologists.

“Two members [of the team] had already begun their journeys and others were not able to travel at the last minute,” Mr Tedros said.

WHO’s In The House

38 thoughts on “WHO Goes There: Friend Or Foe?”