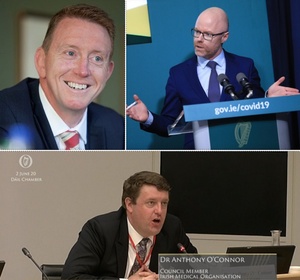 “I hope it does not offend you, but do you ever wonder if some of the scrapes you get into online undermine your reputation? I mean that in the sense that people may see you as being so stressed, which you are very entitled to be, that they might be concerned if they are then referred to you for treatment?

“I think you are so brave in your advocacy and understandably fraught with all that is going on, but maybe being so active online works against optimizing your clinical role? We need advocates like you to speak, but you are almost too transparent and informative one would wonder if I was referred to a doctor who appeared so distressed.

“I am guessing also that you find your advocacy cathartic and I also believe in the need to agitate for change. But maybe less can be more?”

Mr Donnelly has previously confirmed that Mr Dempsey, whose LinkedIn profile lists him as principal at Dempsey Corporate, worked for him in a voluntary capacity during his first general election campaign.

Doctor quits Twitter after PR consultant claiming to be ‘close confidante’ of Health Minister said he was undermining his clinical role (Independent.ie)