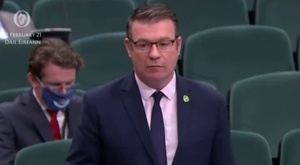 “Some say that travel doesn’t contribute to a large amount of cases, they’re wrong. “

Speaking on RTÉ’s News at One, he said it is not good enough that it will be a number of weeks for the legislation that is being brought in to become operational.

Mr Kelly said that “we’ve locked up our people three times to stay within 5km of their homes, the choice into the future is do we continue to do that or do we quarantine people coming in”.

The Government is seeking to increase fines for non-essential international travel from €500 to €2,000.

Speaking in the Dáil, Taoiseach Micheál Martin said that around 60% of international travellers arriving into Ireland are returning Irish holiday makers.

He told Labour’s Duncan Smith that “there is a sense that €500 is not a sufficient disincentive to travel abroad“.

Earlier: A Voice In The Wilderness

Power Is A Vaccine

‘We Need To be Careful About These Payments’