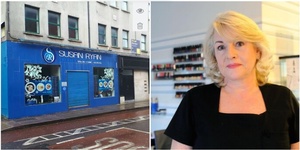 Further to the arrest yesterday of Christine McTiernan following the re-opening of her beauty salon in Balbriggan, County Dublin…

…Speaking to Neil Prendeville on Red FM, Susan Ryan of Susan Ryan Beauty in Cork city said she had made a “firm commitment” to re-open her salon within the next week.

“When we went into lockdown first we took it on the chin. But there was a plan then.We were told to make our salons safe, and we did that at a huge expense. Fat lot of good it did us,” she said.

Ms Ryan said the country was now in the longest lockdown of any country in the world and was “no better off” for it.

“We were told to flatten the curve, to bring down the curve, but now the Government is saying we have to wipe out the virus. That is never going to happen.”

Exclusive: Balbriggan Salon owner Christine McTiernan has vowed not to reopen her salon during the current lockdown as part of her bail conditions after she was charged yesterday with Health Act breaches. Full story in today’s Irish Daily Star @IsFearrAnStar pic.twitter.com/GU0KD66uf9

A colleague points out that 20 Gardai, in six cars, were sent to Balbriggan to shut down a woman who opened her hair salon. But Darina Allen gets a nice writeup in the Examiner for largely the same offence.

You don’t play by the same rules, as an “ordinary” person in Ireland. https://t.co/bo0zBvVIJy

Come Out, You’re Back And Tanned

48 thoughts on “The Pedicure Is Worse Than The Disease”