Simon Coveney says he was aware of people in his campaign carrying out polling without disclosing they were from Fine Gael pic.twitter.com/OMAWIDzo98 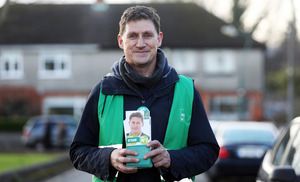 The Green Party has said that in the past some of its activists may have passed themselves off as pollsters to canvass the opinion of voters.

Sinn Féin, accused of the same thing yesterday, defended the practice, saying it was a ‘common political exercise’.

Both Fine Gael and Fianna Fáil confirmed they had employed a similar practice in the past – although Fianna Fáil discontinued the practice several years before Fine Gael.

Other political parties like, the Labour Party and the Social Democats have denied ever using such a system.

Green Party says activists may have posed as pollsters (RTÉ)

“We Need This Cooperation Amongst Our Leaders Too”