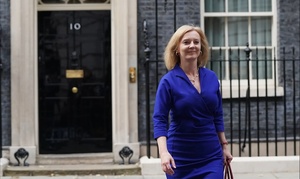 The appointment was confirmed by Downing Street in a tweet shortly after Ms Truss was seen entering No 10.

Her promotion came as it was announced that Michael Gove was being moved to the Ministry of Housing, Communities and Local Government, with a new cross-government responsibility for Mr Johnson’s “levelling up” agenda.

Dominic Raab has been appointed deputy prime minister after being removed from his role as foreign secretary. Mr Raab has also become the justice secretary and Lord Chancellor in the first appointment of the prime minister’s cabinet shuffle.

Earlier this afternoon, Gavin Williamson was removed as education secretary and Robert Jenrick was ousted as housing secretary.