At just 21, his dreams were shattered when a blood clot led to his leg being amputated.

Although he has a prosthesis, it’s too uncomfortable for him to walk for long and he dreams of being able to cycle around the hills of Cobh as he once did.

Issouf spoke to PJ Coogan (above) on air today: He’s fundraising for a better prosthesis but it could cost approx €70,000. 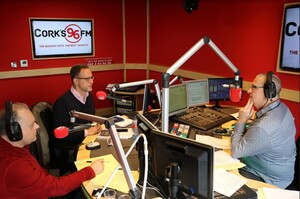 From left: Fergal Barry, Jonathan Sugarman and PJ Coogan, presenter of The Opinion Line on Cork’s 96FM this morning.

But they’re made of sterner stuff in Cork.

May I particularly call your attention to 37 minutes into the interview where Jonathan speaks of the danger of banks in the IFSC plunging Ireland into a fresh bailout, possibly much larger than the one we are experiencing.

The Opinion Line With PJ Coogan Animal rights activist John Carmody spoke on the Opinion Line today to condemn the shooting dead of a pigeon that was “out of control” at the courthouse on Washington Street, Cork…

“Last week a pigeon entered Washington Street Courthouse and positioned itself around the dome of the building for the entirety of the day.The pigeon was suffering from being trapped indoors, and was not. responding to any attempt to lure it down and out of the building.As the courthouse dome is approximately 60 feet from the ground floor, it was impossible to catch the bird. The bird became distressed and an animal control specialist team were sent for.They had no option but to humanely use an air pellet to put the bird out of its misery.”