The scheme will offer artists across the country an €8,000 bursary, combined with an ‘advisory and developmental framework and peer network’ and your own bench. 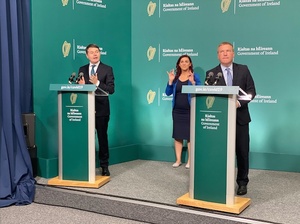 Government spending this year likely to be €86bn versus original plan of €70bn according to Minister for Public Expenditure Michael McGrath. pic.twitter.com/dgaKZiGKRZ

Via The Arts Council:

The Arts Council has welcomed Minister Catherine Martin’s announcement of measures to stimulate employment and activity in the arts and culture sector, saying it would invest in a range of schemes to support artists and arts organisations across the country.

As part of the €31 million package…said it would invest the additional resources in enhanced bursaries, commissions, projects and other supports for individual artists and practitioners, and in the arts organisations through which much of the work is made.

Funding through the Creative Ireland programme to fund artists in local communities through local authorities; a music support scheme that will support all genres;.

€5 million to support the audio visual sector in de-risking the costs of productions to be rolled out in conjunction with Screen Ireland;

€5 million to help de-risk the costs of creating new theatrical works and other performances; €6 million in capital for arts infrastructure funding to accelerate construction in cultural institutions;

€2 million for the BAI’s Sound and Vision Fund; €3 million for a dedicated TV Drama fund to be run by Screen Ireland…

Previously: The One Per Cent Artists and arts organisations across the country are suffering enormous financial losses and facing an uncertain future as a direct result of the Covid-19 public health crisis, new data from the Arts Council shows.

Via The Arts Council

Surveys carried out by the Arts Council, the government agency for funding and developing the arts, show that 90 percent of artists have been impacted by cancelled or postponed events, with a great many describing the effect on their financial situation as ‘severe’ and almost half applying for the Government’s Covid-19 emergency payment.

Arts organisations estimated the loss of audience at 2.4 million people and growing, with more than 12,000 events cancelled and hundreds of staff members being laid off.

Arts Council Chair Prof. Kevin Rafter has said the information gathered from the surveys will help the Arts Council better understand the impact of jobs and livelihoods, and the responses needed to help the sector come through the months ahead…. The Sunday Independent reported on a survey carried out last year by Irish Equity, which is part of the union SIPTU, and represents actors, theatre directors, stage and set designers in Ireland.

The survey involved people, mostly women, working in the arts and wasn’t limited to any one location.

It found that almost 60 per cent of those surveyed said they had been bullied but that almost 75 per cent had not reported it because they feared it might jeopardise future work opportunities.

Karan O’Loughlin, speaking to Keelin Shanley on RTE’s News At One this afternoon said:

“This is an open secret in the arts. We went to the Arts Council with this early in 2016 to ask them to help us to deal with it by connecting funding to robust anti-bullying procedures and they refused.

“They said it wasn’t their business.”

“It’s an absolute pre-requisite, in my view, that all of the funding bodies should insist that any organisation applying for funding, or being supported with State money, should have robust anti-bullying and anti-harrassment, including anti-sexual harassment procedures in place.”

Abuse in the arts: the shocking truth (Irish Independent) A Spontaneous tribute by Arts Council staff to Patrick Scott, one of our greatest artists, Aosdána Saoi, passed away this afternoon.