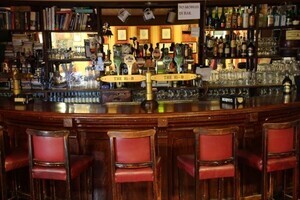 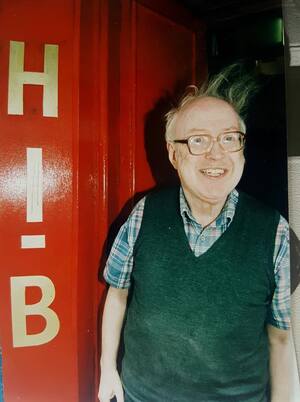 It is with great sadness that we announce the passing of my father Brian O’Donnell at 12.30am Friday morning in the Mercy Hospital after a short illness. On behalf of the family we would like to thank the wonderful staff of both St Luke’s Home and the Mercy Hospital for the wonderful care that he received over the last number of years. Arrangements to follow. May he Rest In Peace.

“He was iconic in Cork. He almost became a tourist attraction in himself. I remember bringing visitors over from America and we went for a drink in the bar. They were shocked when one took out their phone to check a restaurant reservation and they were brought to book and told to put it away.

“That was part of the charm. It wasn’t like a regular bar. It was a place where conversation was encouraged and he encouraged it in his own unique manner. It’s a loss for the city.”

‘He was a tourist attraction in himself’: Tributes pour in for Hi-B owner (Evening Echo) 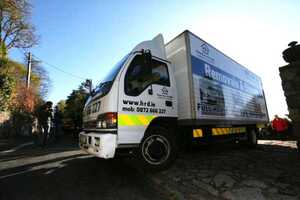 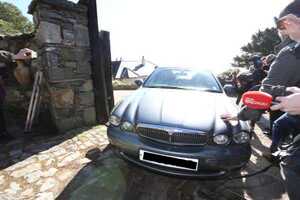 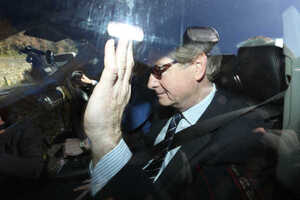 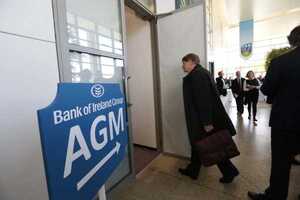 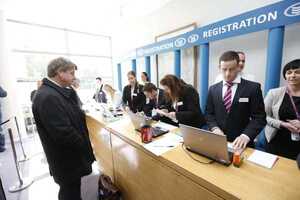 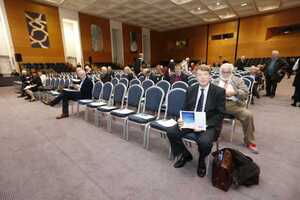 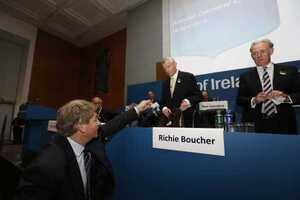 Mr O’Donnell at the the Bank of Ireland AGM at UCD’s Reilly Hall, to ceremoniously hand back the keys to Gorse Hill to BOI’s top brass Richie Boucher (above left) and Archie Kane (right). 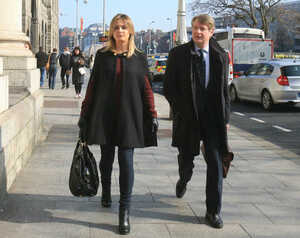 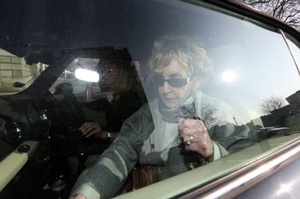 Meanwhile, at the Court of Appeal…

During proceedings today Mr [Brian] O’Donnell highlighted the media coverage of the case.
He said the eviction notice at Gorse Hill was “hammered into the front gate in front of the worlds media”.
He added that there were 64 reporters and 3 satellite trucks outside Gorse Hill when the court served the eviction notice.
Ms Justice Finlay Geoghegan earlier told the court that Mr O’Donnell’s wife Mary Patricia must come to court to express her agreement in going ahead with the appeal…

More when we get it 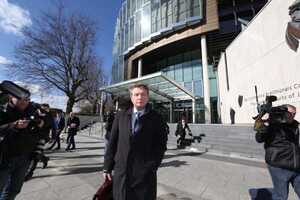 Brian O’Donnell (top) and Jerry Beades (above) of the New Land League outside the Court of Appeal.

The Court of Appeal has granted Brian O’Donnell a stay on the trespass injunction imposed yesterday (by Justice Brian McGovern) on Gorse Hill, Killiney, Co Dublin.

Mr O’Donnell’s appeal will be heard next Thursday at 2pm.

Mr O’Donnell told the court today that he has 22 grounds of appeal. He said the judge [McGovern] in his ruling yesterday erred in both law and fact. He said these proceedings had been “railroaded” through the courts in a deliberate attempt not to give him adequate time to respond to the claims.

He said the shortness of the stay granted yesterday [24 hours] was intended to prevent him from appealing. Mr O’Donnell said the decision was “grossly unfair and unjust”. 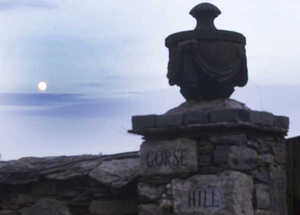 In the matter of Gorse Hill

Brian O’Donnell this afternoon outlined to the court why he wanted to cross-examine a representative of Bank of Ireland and the receiver. He said facts had been put to the court that are not agreed.

Mr O’Donnell also argued that Bank of Ireland cannot legally take trespass proceedings as it does not have legal possession of the property.

Justice [Brian] McGovern said he will reserve judgment on the request to cross-examine.

Reading from his affidavit, Mr O’Donnell told the court he and his wife have a right of residence in Gorse Hill since October 2000 when it was given to them by Vico Limited that owns the property.

He said senior Bank of Ireland officials knew this.

Mr O’Donnell also alleged documents issued by Bank of Ireland were not properly sealed and witnessed, making them invalid.

He said the bank has got many assets from them already including properties in Oughterard in Galway, two buildings and a car park in Merrion Square and property in London.

The bank has refused to say how much all this was worth, he said, so Mr O’Donnell does not actually know how much he owes the bank.

He also said he and his wife paid back €700m to banks around the world. The only bank they have difficulty with is Bank of Ireland, he said, and for these and other reasons the court should refuse an injunction against Mr O’Donnell and his wife…

Justice McGovern will reserve judgment “until an unspecified time and date”. 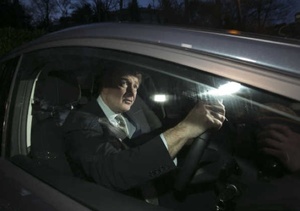 Brian O’Donnell arriving back at Gorse Hill this evening. 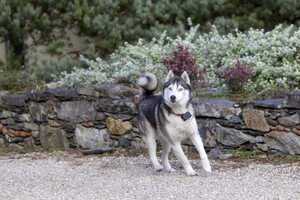 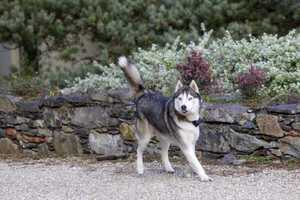 Latest images of the O’Donnell Husky/Malmute.

Did he just stick his tongue out? 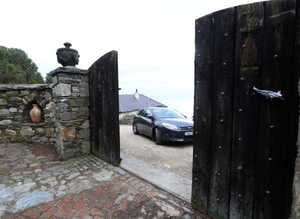 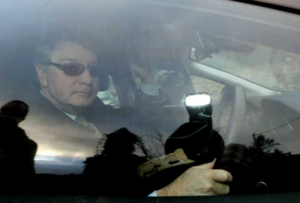 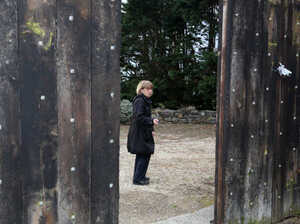 Brian O Donnell leaving Gorse Hill in Killiney with Dr Mary Patricia O’Donnell* (above). Mr O’Donnell is expected in  the High Court court this morning in another fight to remain at the home. Proceedings get under way at 11am.

Previously: Gorse Hill And The Right Of Residence

* Probably someone else (see comments). 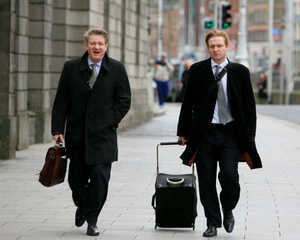 Brian O’Donnell and son Blake arriving at the High Court this morning. 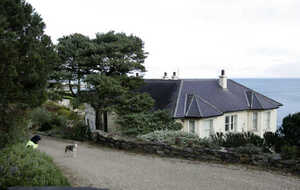 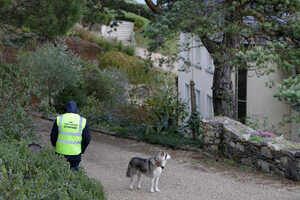 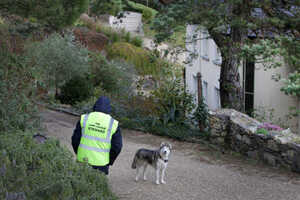 Further to the Bank of Ireland reposession hoo ha

The High Court case was adjourned until 2pm today. Mr Justice Brian McGovern said he wants affidavit evidence on Tuesday from receiver Tom Kavanagh outlining what has been happening at the property since noon on Monday when the receiver was due to take possession…. 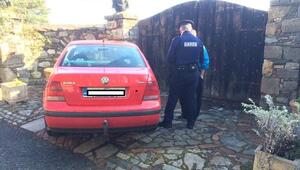 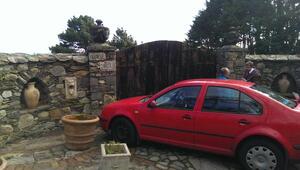 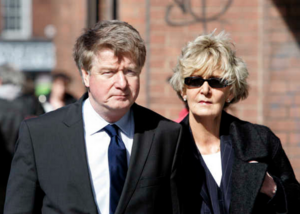 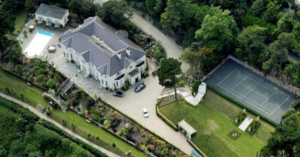 Top: the scene outside the home of  Solicitor Brian O’Donnell with his wife Dr Mary Patricia O’Donnell (centre, at the High Court in 20120, and an aerial view of their home in Vico Road, Killiney, Co Dublin

“Solicitor Brian O’Donnell has barricaded himself into his palatial home in a last-ditch effort to prevent the banks taking possession of it. The high-profile legal eagle invited members of the Land League anti-repossession movement to stay with him at Gorse Hill on Vico Road, in Killiney in Dublin – once valued at €30m.”