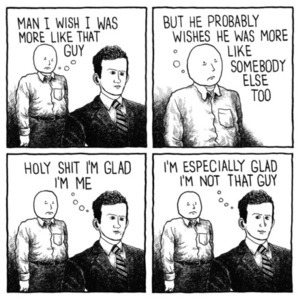 Of this sequel to his First And Final Frames montage, editor Jacob T. Swinney sez:

Part II plays the opening and closing shots of 70 films side-by-side. Like the first video, some of the opening shots are strikingly similar to the final shots, while others are vastly different–both serving a purpose in communicating various themes. The side-by-side comparison can communicate an entire story, but also allows us to develop new theories about a given film. So once again, what can we learn from examining the first and final frames of a film?

Even if you suspect the answer to be ‘not much’, this is a a divertingly smooth five minute montage.

Something to take your mind off the fact that a smackhead is pissing on your sleeping bag as you huddle in the doorway of Carphone Warehouse tonight – waiting for the single greatest thing since the other thing Apple launched last week.

US cellphone retailer WireFly presents the ultimate three-way geek-off: 3G versus 3GS versus 4G. It’s so on.

(Bonus feature: the most annoying voice you’ve ever heard.)